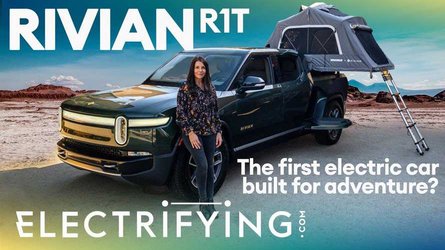 Pickup trucks aren’t used as daily transportation in most places outside the United States, and thus pickups themselves are nowhere near as common. But that doesn’t mean people that don’t live in the US are not huge fans of pickups, because they are, and when they are as good as the new Rivian R1T even non-truck-lovers may get a kick out of it.

Electrifying got the chance to walk around and take all the R1T’s details in – they don’t take it for a drive in this video, but the fact that the truck is presented from a British motoring journalist’s point of view makes this video more interesting than you might think, as it diverts a bit from other videos you may have seen, all of which featured Americans.

Reviewer Ginny Buckley says her family used to own pickups and that she is drawn to this type of vehicle. And the Rivian R1T is really easy to love because it looks great, it has an excellent luxurious yet still utilitarian and well thought out interior, it can go off-road and on road the most powerful version sprints like a supercar; even in the corners, it’s not as bad as you might think.

Now even though the R1T is fairly compact by US standards, for us Europeans it’s actually quite big. In Europe vehicles like the Ford F-150 (which you do see occasionally) just stick out and look big and the R1T would be the same if it was brought to the Old Continent. In fact, us Europeans should get a chance to drive a Rivian here because they are reportedly planning on coming to Europe next year.