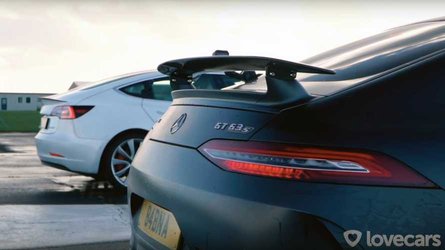 It’s hard not to be impressed by the sheer punch of the Tesla Model 3 Performance, with its 3.2-second time to sixty and remarkable acceleration off the line. In this respect, it punches well above its weight (and price bracket), being quicker than cars that are quite a bit more powerful than it.

One such example is the top of the range Mercedes-AMG GT63S 4Matic+ four-door, whose 630 horsepower push it to sixty in a tenth quicker than the Tesla. However, it turns out that in the real world, the Tesla might still be faster to sprint, as this video published by LoveCars illustrates.

It features a drag race between these two cars and while you may think the AMG’s superior power-to weight (and its quicker sprint time on paper) would make it a foregone conclusion, it turns it’s not quite so simple. Maybe the fact that the drag race was held in wet conditions may have played a part in it, but few vehicles can match a Model 3 Performance’s off the line… performance, wet track or not.

The only thing that isn’t clear is whether or not Tiff Needell’s botched start in the AMG could have been avoided by turning off the car’s electronic nannies. He did enable launch control, but with traction control turned on, the Mercedes kind of bogged down off the line, allowing the Tesla to shoot ahead; it did catch the EV just before it crossed the line, though.