The group on Tuesday lifted its target for operating profits in 2025 — when it aims to become the market leader in electric vehicles — to between 8 and 9 per cent of revenues from 7 per cent to 8 per cent. The difference equates to at least €2bn in increased earnings per year.

In its first strategy update since late last year, VW —which is home to the Audi, Porsche and Seat brands — forecast that profit margins for electric vehicles would be on a par with those of combustion engine models, “within the next two to three years”, largely due to higher taxes and regulatory pressures.

The announcement comes a day before the EU is set to unveil a wide-ranging set of climate policies, including a sharpening of CO2 vehicle emissions targets, and a possible ban on sales of new petrol and diesel cars from 2035.

VW last week revealed it had booked €11bn in operating profits for the first half of the year, as the economic rebound from the pandemic offset the global shortage in auto semiconductors. The figure surpasses the group’s total earnings for 2020, a year blighted by the coronavirus crisis, and its earnings in the same period in 2019.

As rivals spend heavily to prepare for the end of the internal combustion engine, VW is investing €35bn on developing electric vehicles. Over the past few months, the group rolled out its first two dedicated zero-emissions cars, the ID.3 and ID.4.

Almost all vehicles sold by VW in the US, Europe and China in 2040 would be battery powered, the carmaker said on Tuesday.

VW also announced plans to build a new gigafactory in Spain with an annual capacity of 40 Gigawatt hours, adding to plants already under construction in Sweden and Germany. 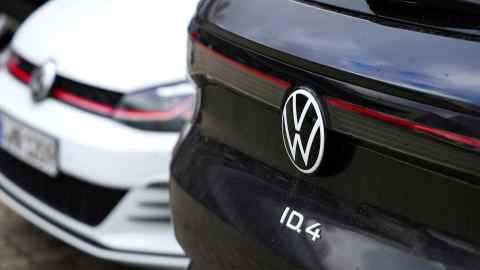 Chief executive Herbert Diess said VW would be “one of the biggest battery users globally”, adding that it would “cover 80 per cent of our electric volume” with its own battery production by 2030.

The group would aim to produce its first “affordable” battery electric vehicle, priced between €20,000 and €25,000, in Germany from 2025. Both decisions would be dependent on state subsidies, VW said.

Alongside the factory in Spain, VW confirmed that the proposed battery plant in Salzgitter, roughly 50km from the group’s Wolfsburg headquarters, would now be built in collaboration with China’s Gotion High-Tech. VW became Gotion’s largest shareholder when its Chinese subsidiary invested €1.1bn last year.

In total, VW plans to build six giga factories in Europe by 2030, with a total capacity of 240 GWh per year. Chief financial officer Arno Antlitz told analysts that the company only plans to pay for one of the factories out of its own pocket, with the rest being financed via partnerships.

The industry as a whole is expected to need at least 30 gigafactories on the continent to meet demand.

Electric rival Tesla is building its own battery plant in Berlin, which founder Elon Musk has said will have a capacity of 100 GWh, potentially rising to between 200 and 250 GWh a year.