Despite historic vehicle shortages, supply chain challenges that are unprecedented, and a huge surge in demand due to market disruptions, Toyota’s RAV4 Prime delivery rate has been higher than Toyota indicated it would be. In a June 30th, 2020 story, Tesla advocacy publication, Elektrek, quoted a Toyota representative as predicting the RAV4 Prime’s delivery. “We anticipate the first model-year would be about 5,000 – and year 2 forward would be about 20,000.” Seemingly hopeful that the RAV4 Prime plug-in hybrid-electric vehicle (PHEV) would fail, Elektrek called this delivery rate “Laughable.” If it is funny that the 94 MPGe RAV4 Prime is the country’s second-fastest-selling automobile we miss the humor. 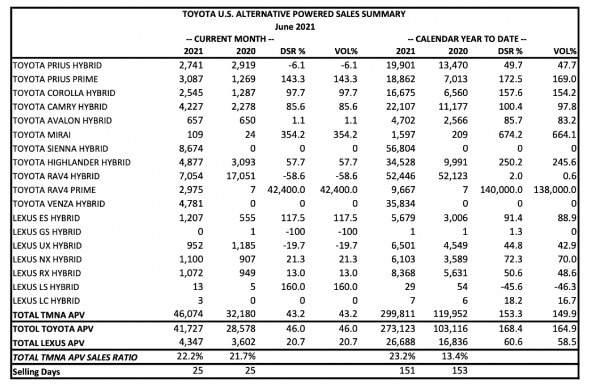 Since Toyota’s delivery projection exactly one year ago, Toyota has exceeded the rate at every milestone. Not yet into its second model year, Toyota is already delivering the RAV4 Prime at the 20K annual rate Toyota indicated it would during its second model year. For the first two quarters of this year ending June 30th, Toyota delivered 9,667 RAV4 Primes, and its June deliveries were 2,975 units in the U.S. market. Thus, Toyota’s annual rate continues to accelerate, and if we multiply June’s rate by 12 the annual pace of delivery is now 35,700, though month-to-month deliveries always go up and down for all vehicles throughout a year.

Toyota’s green vehicle portfolio continues to deliver solid results. Toyota delivered over 3,000 Prius Prime PHEVs and the RAV4 Hybrid remains one of the country’s top-selling green crossovers with over 7,000 units delivered in June. Total sales of Toyota and Lexus green vehicles were just shy of 300,000 units for the first half of 2021 making Toyota the leader in U.S. green vehicle sales and deliveries. Despite this high volume of deliveries by Toyota, market shortages have driven up the value of new Toyota models. As our related story below highlights, many dealers are successfully selling popular models above MSRP.

Toyota’s model year change from 2021 to 2022 for the RAV4 Prime plug-in hybrid-electric vehicle should occur in the third quarter or early fourth quarter of this calendar year. We will watch for another uptick in the delivery rate of this smash-hit model.

John Goreham is a long-time New England Motor Press Association member and recovering engineer. John’s interest in EVs goes back to 1990 when he designed the thermal control system for an EV battery as part of an academic team. After earning his mechanical engineering degree, John completed a marketing program at Northeastern University and worked with automotive component manufacturers, in the semiconductor industry, and in biotech. In addition to Torque News, John’s work has appeared in print in dozens of American newspapers and he provides reviews to many vehicle shopping sites. You can follow John on TikTok @ToknCars, on Twitter, and view his credentials at Linkedin