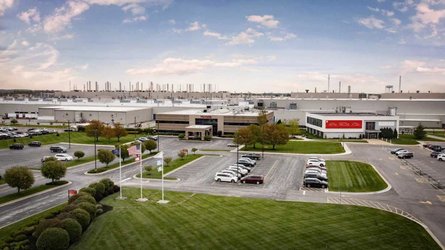 Toyota announced recently a significant $803 million investment in its Princeton Plant in Indiana to prepare the manufacturing line for two all-new vehicles.

At this point, we don’t know yet whether those will be plug-ins. The Japanese manufacturer said only that the plan is to add two “electrified”, large three-row SUVs, both with seating for up to eight passengers – “designed with the active Gen Y American Family in mind.”

One will be from the Toyota brand, and the second from the Lexus brand.

“Toyota announced an $803 million investment and 1,400 new jobs at the Princeton, Ind., auto-manufacturing plant in preparation to introduce two all-new, three-row SUVs designed with the active Gen Y American Family in mind. What’s more, only one will bear the Toyota name. The other will officially introduce the Lexus line to Toyota Indiana.”

Because Toyota says that those two new SUVs will help it get another step closer to Toyota’s global aim towards carbon neutrality by 2050, we guess that those might be plug-ins. Especially since the company announced three new plug-in models in the U.S. in 2021 (two BEVs and one PHEV).

“While these new vehicles will be announced at a later date, both will join a diverse, electrified product portfolio and will help the company get another step closer to Toyota’s global aim towards carbon neutrality by 2050—all this while furthering its mission of mobility and happiness for all.”

In the case of large SUVs, our bet is on plug-in hybrid powertrain and judging from how well the Toyota RAV4 Prime was received, we guess that it would be a smart move.

A conventional hybrid would be a disappointment, while plug-in SUVs would build a great foundation for further expansion towards already announced electric pickup trucks.

Over the past 25-years Toyota Motor Manufacturing, Indiana (TMMI) has already invested some $6.6 billion in the plant in Princeton, Indiana and employs more than 7,000 people. With 1,400 more it will be 8,400.

“The $803 million investment will be used to prepare the manufacturing line for the new vehicles, production-employee training, as well as provide supplier re-tooling at their facilities. Since the first Tundra—the original TMMI vehicle—rolled off the production line in 1998, Toyota’s total investment in the Princeton site is $6.6 billion. TMMI currently assembles the all-hybrid Sienna minivan, Highlander/Highlander Hybrid SUV and Sequoia full-size SUV, and has the capacity to assemble more than 420,000 vehicles annually.”