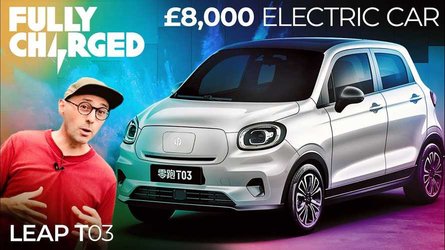 There is a plethora of small electric cars on offer in China and most of them are quite affordable by European or American standards. But affordable doesn’t necessarily mean so bad that being aboard this vehicle feels like driving around in a public lavatory and the Leapmotor T03 (along with quite a few others, it must be said) stands testament to that.

The T03 costs the equivalent of around $10,500 and the Fully Charged Show’s resident Chinese correspondent says there is a whole lot to like about it. He shows a nicely design, well built, tech-packed little electric city car that would make a lot of sense in Europe, perhaps more sense given the fact that small winding urban streets are more common than in China.

Motivation comes from an electric motor that puts out 75 horsepower (55 kW) and 155 Nm (114 pound-feet) that draws from a 36.5 kWh lithium-ion battery pack. The manufacturer says it also supports fast charging (although we didn’t find the exact value) good for 30 to 80 percent in 36 minutes; top speed is limited to 100 km/h (62 mph).

Overall, its specs are good, but they are not unmatched among other Chinese rivals. What those rivals can’t match, though, is the array of safety kit that the T03 has, since it has Level 2 semi-autonomous driving features. It even has a camera that monitors the driver, as well as 11 ultrasonic sensors, lane departure warning, adaptive cruise control and self-parking, among others.