According to the manual, the Auto mode will automatically select from either Electric (Charge Depleting) mode or Hybrid (Charge Sustaining) mode according to the driving conditions. This is wonderfully vague and doesn’t really answer the question, though clearly in this mode my Sorento PHEV will decide for me whether to run solely on the electric motor powered by the high voltage battery or in hybrid mode, using both the gasoline engine and the electric motor. But what I want to know is under what conditions does my Kia Sorento pick one mode or the other?

I have poked around on the internet, I have posted in Kia Sorento PHEV Facebook groups, I have scrolled through the manual and many pages of Kia’s American and European websites. I have even reached out directly to Kia America to try and get a more definitive answer. I am doing this not just to build my nerd cred with this technology, but to try and answer some of the genuine questions I see being asked over and over in Kia PHEV forums in multiple countries: What is the Auto mode exactly? How does it work? Will using it give me better results, efficiency wise, compared to manually toggling between EV and HEV modes? Is my PHEV smarter than me?

Let’s test things out a little and see what others are saying on forums for Kia’s PHEV models. The best explanation I could find was from a poster in Italy who said that in Auto mode the system selects between EV and HEV modes based on speed, power request for acceleration (or accelerator position) and the type of driving surface. Note this was regarding the Kia Exceed PHEV, a model we don’t have in the US, but it may be the same for all Kia PHEVs. But at what speed(s), what accelerator position(s), and what type of driving surface(s) are these decisions made? Is it speeds over 75 kph / 46.6 mph? Is it when the accelerator is pushed 70% down or more? Is it only on asphalt roads? Likely it would be some combination of these, sometimes, or maybe always in one of these cases, sometimes in the others. The lack of precision only encourages my nerdiness, and frustrates my desire to provide a simple explanation to the less nerdy drivers out there that just want to know if they’ll get about the same results in Auto as they would “worrying” about when to switch between HEV and EV modes themselves.

While I am waiting on an answer from Kia, let’s try to test this algorithm out in my Sorento PHEV. Here’s the parameters of the experiment: I will select a 10 mile course that will include 3 runs or loops. The first will be with the vehicle in HEV mode the whole way to warm up the engine – since that could impact the mpg figures in the other runs, attempting to stay at the speed limit throughout. For the second loop I will put the vehicle in Auto mode and will cover the same approximately 40% of the route on the freeway at 60 mph, and 60% of the distance on 25-35 mph side streets that include steep climbs and descents of a few hundred feet (steep enough to need all the electric motor can provide to maintain speed). For the third run I will manually put my Sorento PHEV into HEV mode as soon as I exceed 45 mph (which would be on the freeway on-ramp), and manually switch it back to EV mode whenever I am travelling under 45 mph (as I exit the freeway).

The conditions for my test were as follows: the streets were dry and the temperature outside was 58 degrees Fahrenheit. No breezes to speak of, and no sunshine either, just another gray but slightly warmer than normal Sunday in November in the Seattle area. For those who might care, the PSI in my tires was set to 38 all around and I didn’t use cabin heat (just heated seats and steering wheel).

For the first loop, I switched my Sorento into hybrid mode while I was backing out of the garage. The gas engine fired up immediately and I drove about .7 miles to the freeway on ramp. This was the section of the loop where I saw the highest “instant” fuel economy at 37.4 mpg (note, I live on top of a hill and the freeway is basically at the bottom). I drove 3.7 miles on the freeway, staying at 60 mph or slightly below the entire distance. Coming back, I followed a twisty side road through neighborhoods with multiple steep hills to go up and down. When I got back to my starting point, at home, this is what the trip display showed: 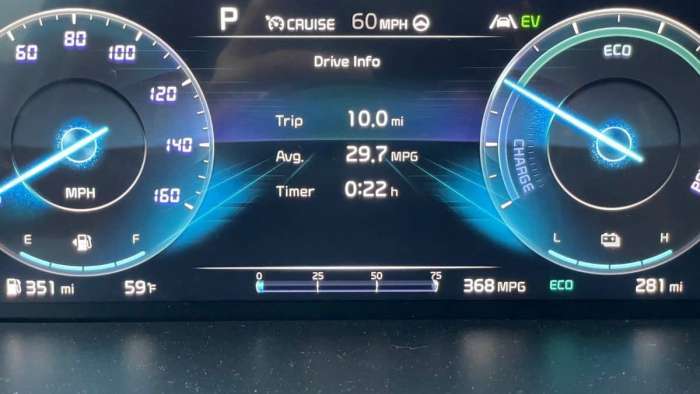 This is more or less what I expected; the steep hills and the fact that the engine was cold initially, and the freeway section wasn’t particularly long, meant I wasn’t likely to see the EPA figures. Not much else to say about this first pass, it was unsurprising.

For the second loop, from the same starting point, I put my PHEV into Auto mode to let it choose whether to keep the car in EV mode (which it always starts in, by default) or to switch to HEV mode. The Sorento stayed in EV mode all the way to the freeway. As I sped up and began to merge, I expected it to switch to HEV mode. Note, I was accelerating normally up to speed (i.e. not flooring it, and not hypermiling either). And surprise, the car stayed in EV mode! I accelerated a little harder, up to 62 mph (I know, I know, living life on the edge) to pass a group of cars that couldn’t be bothered to go 50 (the speed limit was 60 and I was trying to stay right on it). Did I mention Seattle drivers are terrible, either driving like it’s their first time behind the wheel or like they are auditioning for the next Mad Max film? No middle ground. Anyway, the Sorento continued to stay in EV mode. Was it anticipating my departure from the freeway in a few miles? Was it waiting to see if I stayed on the freeway longer or sped up a little more?

A few miles later, I exited the freeway with the car still in EV mode. I wondered if it might stay there the whole trip. The first .5 mile of the side roads are very steep and required me to push the right side needle (which would otherwise be the tach, see below) a smidge into the “Power” band in order to hold 25 mph going uphill (which was the speed limit). The remainder of the route back to my starting point had more hills, ending with another very steep hill for the last mile. When I got home, here’s what the trip display showed: 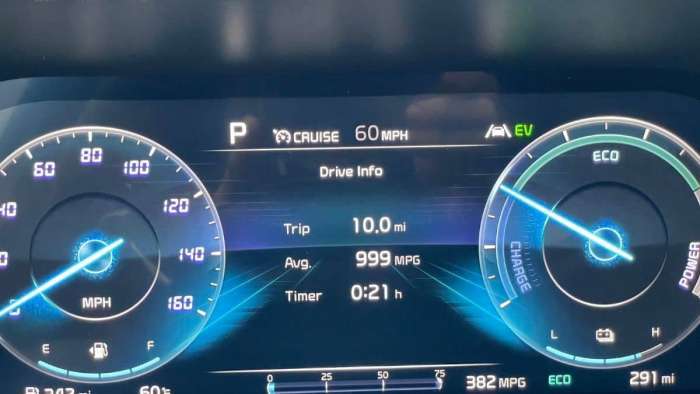 Thus, in Auto mode I was able to complete the entire 10 mile loop without using any gas at all. Apparently, Kia’s algorithm is more complex than I figured. I assumed it might default to HEV mode once I reached freeway speed, or if it could tap into the GPS when it realized I was on the freeway. I think we’re going to need a better test!

I almost called the test off after the second loop because I expected the vehicle to have switched to HEV mode at some point on the freeway and because that didn’t happen I felt like I didn’t design my test well enough. I went ahead with the third loop regardless to set a baseline and to see the difference between all HEV mode and about 60% in EV mode. Obviously, I’ll need a different test and I already have an extended route in mind that will also allow me to test if perhaps the reason I never got out of EV mode the second time through the loop was due to how far I depressed the accelerator (see the end of this piece).

After returning to my starting point at the end of the second loop, just as I had the first time, I turned off the Sorento PHEV and got out. This reset the drive info screen before starting out (and allowed me to check on some unexpected flowers in my front yard, in November, in Seattle…). By default the Sorento starts in EV mode so all I needed to do to begin the third run through the loop was to put it in reverse and back out of the driveway. About .7 miles later I entered the freeway and as soon as I hit 45 mph I tapped the HEV/EV button to put the car into HEV mode. The trip mpg display immediately began to drop from 999 mpg (which indicates fully electric mileage). By the time I approached a first gen Chevy Volt going about 55 mph, my mpg had dropped a little below 150 mpg and I proceeded to speed up and pass the Volt so I could maintain my 60 mph target speed. The Volt sped up just as I swung into the left lane (because of course it did). I dipped further into the throttle to pass the Volt at 65 mph, briefly, before dropping back into the right lane about a quarter mile later when I was sufficiently in front of the Volt. By the time I exited the freeway a couple miles later, my mpg was down to just under 50 mpg when I tapped the HEV/EV button again to return to EV mode for the…