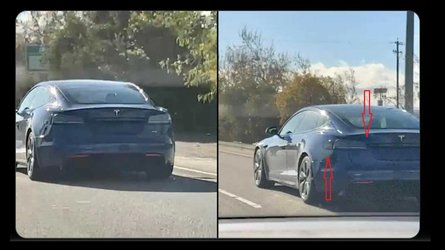 The refreshed Tesla Model S and Model X are expected to receive a small but important upgrade to the taillights and charging flap.

Recently we saw the new version in a prototype of the Model S at the Tesla Factory’s test track in Fremont, California, and here are new photos shared by the Tesla Model S Plaid & Long Range Facebook group (via Sawyer Merritt).

We can clearly see the new, bigger charging flap, which should easily handle the CCS-compatible charging port. The previous version was able to fit only Tesla’s compact proprietary connector or the European Type 2 charging inlet (used for both AC and DC charging).

This new charging flap is a kind of “inverted” compared to the Model 3/Model Y. We are eager to see how it opens.

The second change concerns the taillight design. At this point, we don’t know whether the light quality itself will be noticeably changed.

The open question is whether those two things are the only ones related to the launch of the refreshed Tesla Model S/Model X in Europe or if there are some other undisclosed changes as well?