Fifteen years ago, the documentary “Who Killed the Electric Car?” ended with a shot of a Tesla driving over a hill and coming into sight of the camera. It was a hopeful note for fans of battery-powered cars, but director Chris Paine said he didn’t foresee the complete turnaround on the marketability of electric vehicles (EVs).

“This never happens in environmental battles. Usually you’re like, ‘I’m sorry, that’s the last blue whale. You filmed it. I’m really sorry. They were beautiful.’ So, it’s really encouraging,” Paine said. “We had no idea that filming that first prototype Tesla coming over the hill was going to be the beginning of a kind of revolution.

“We were certainly hopeful that that might head somewhere but the fact that 15 years later they became certainly the most talked about car company in the world.”

Paine’s inspiration to make the documentary came from personal experience. In 1996 General Motors released and began leasing the EV1, the first mass-produced and purpose-designed EV of the modern era.

“I had never bought a new car before, but I heard that this incredible engineering team had put together the EV1,” he said. “I love great design engineering and I thought, ‘Okay, I’m going to try this car.’ When I drove for first time I went, ‘Oh, this is the future of cars. I could get behind this,’ and I became like a superfan.”

After driving the vehicle for years, and renewing his lease once, something strange happened. Paine’s second lease came back with no renewal clause. After some digging, he found out it was because GM wanted to cancel the program. It was only later, in 2003, that the automaker officially discontinued the EV1 program, claiming it couldn’t sell enough electric cars to make the program profitable.

“The program was very quietly sort of snuffed out, and only those of us who had leased these cars even knew that the cars were around,” said Paine. “You had to be in California really to know that electric cars were possible, but we knew that 5,000 electric vehicles were out there. The program had been cancelled, which was a very complicated thing, which is what our movie is about, how the cars were destroyed.”

Paine and of his friends figured out an unusual way to get media attention to the cancellation of the program. They decided to hold a funeral for the car in Los Angeles with the hope of gaining media attention to what GM was doing.

“We were all drivers of these cars but none of us were really filmmakers,” Paine said. “We got the Hollywood Forever Cemetery and we prayed there wasn’t an actual, personal tragedy happening on the same day. And, as it turned out, it was a huge smog alert week. This turned out to be really a great, great thing for us and we filmed it and then we thought, ‘Well, since the media didn’t pick us up really, we’re going to go ahead and make a movie.’” 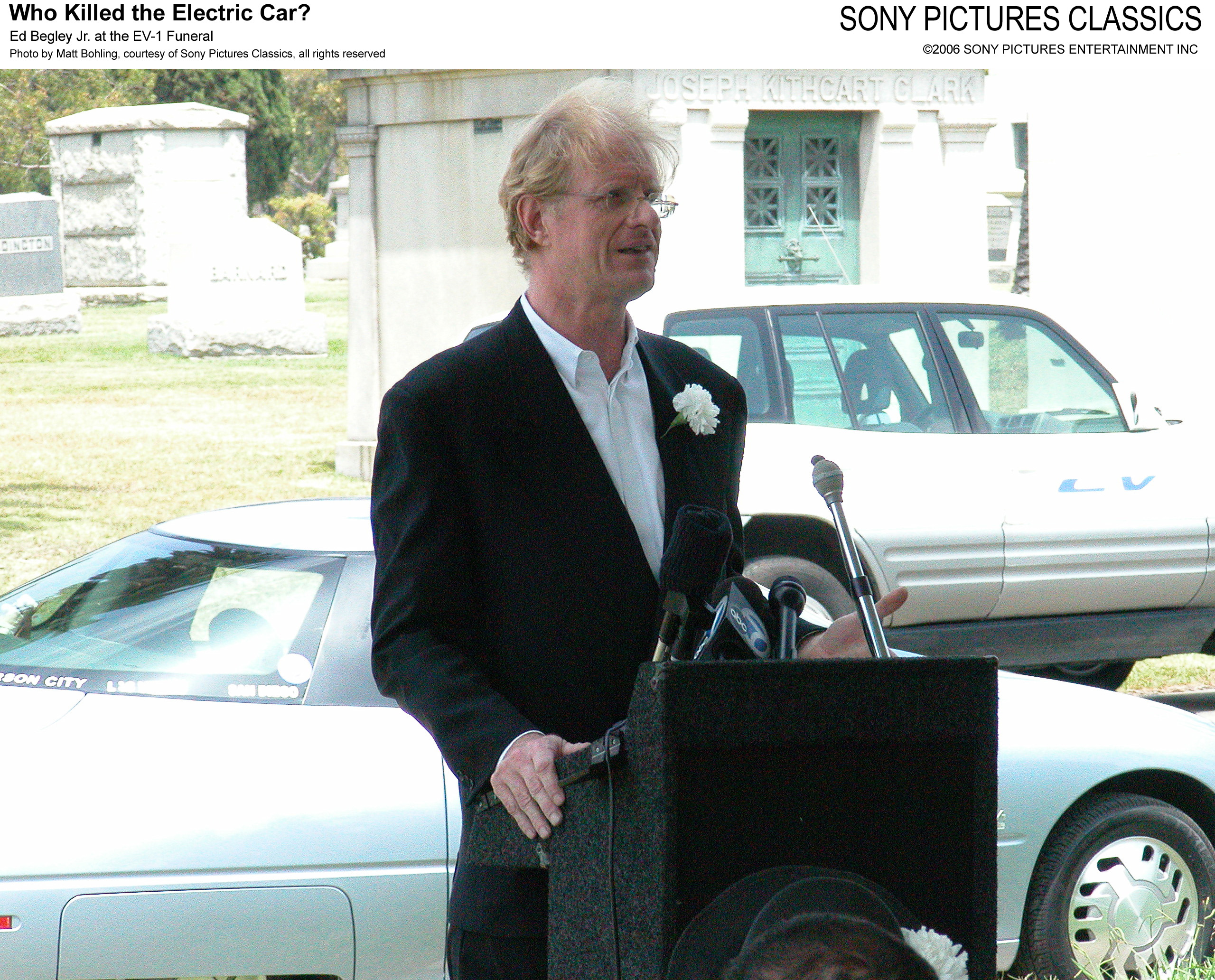 From: Wright, Rob Sent: Thursday, July 6, 2006 7:17 PM To: Photodesk – Toronto Star Subject: images hi folks: please go to this site and download and put into cascade 4 images: 1. first one, top left; 2. 4th one, of piper leading funeral; 3. 6th one, of ed begley jr.; 4. the one right
underneath begley, of crushed cars piled up. thanks rob http://www.mongrelmedia.com/press/Who_Killed_Electric_Car/index.html

The mock funeral ended up giving the documentary its best line, courtesy of actor Ed Begley Jr., during a eulogy for the EV1. “The electric car is not for everybody,” he said. “It can only meet the needs of 90 per cent of the population.”

In the 15 years since Paine’s documentary lamented the loss of the electric car, it appeared the reports of its death have been greatly exaggerated. Ford recently launched the F-150 Lightning electric truck, the Tesla Model S Plaid ran a quarter mile in 9.247 seconds at 152.09 mph and GM, the villain of Paine’s film, announced a plan to offer 30 new EVs globally by 2025.

They’ve even gotten U.S. President Joe Biden’s endorsement. “The future of the auto industry is electric. There’s no turning back,” he said in May during a visit to the Ford Motor Co.’s electric vehicle centre in Michigan. “The question is whether we will lead, or we will fall behind in the race to the future.”

“It’s not just the technology getting better,” said Paine. “It was people committing to hybrids and people saying, ‘Alright, I’m going to try one of these electric vehicles.’ Personal decisions. And the car industry said, ‘Jeez, people were actually buying these. We better not miss out on this market.’”