Vauxhall has unveiled a new version of its popular family estate with a bold promise of perhaps its most comfortable ride ever.

For the ergonomically designed front seats of the stylish new Astra Sports Tourer are certified by Germany’s Campaign For Healthier Backs to provide optimum comfort and support, vital on long journeys.

The new family load-lugger will be available with a plug-in hybrid powertrain from launch, making it Vauxhall’s first ‘electrified’ estate.

To ensure versatile performance, the boot provides up to 608 litres of space with the rear seats upright, and up to 1,634 litres when folded flat.

An underfloor lithium-ion battery in the plug-in hybrid reduces this to 548 litres and 1,574 litres.

Petrol and diesel variants can be specified with an optional moveable load floor ‘­­IntelliSpace’, which can be set as high and low positions and tilted at 45 degrees.

The rear tailgate has a convenient 600mm loading height.

At launch the 225 hp plug-in hybrid is expected to combine a 1.6 litre four-cylinder turbocharged petrol engine with a 12kW battery set-up — plus an eight-speed automatic gearbox — and cost from about £34,000. 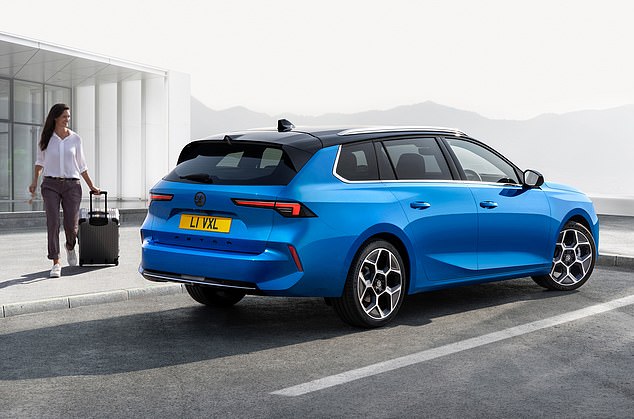 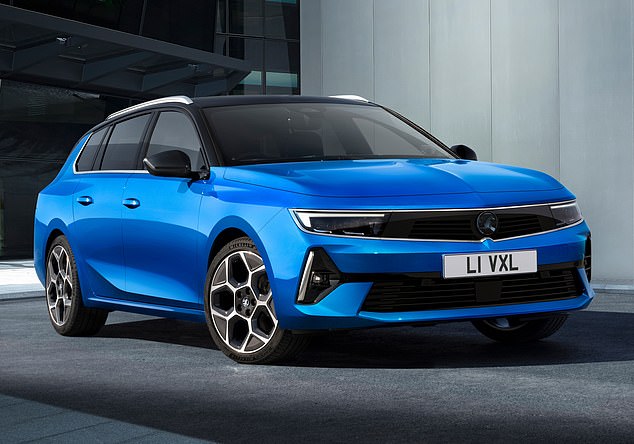 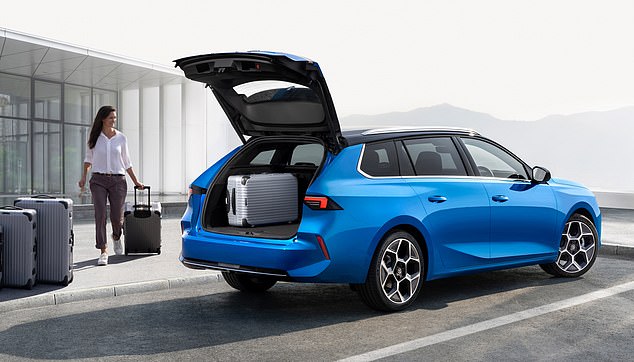 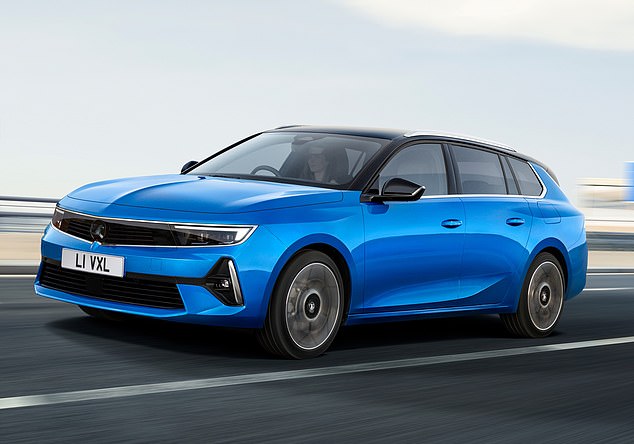 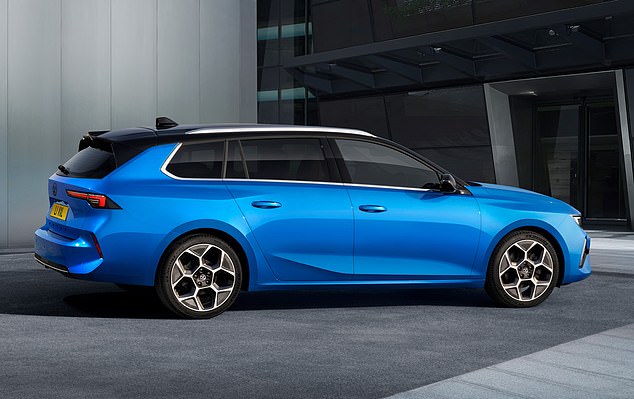 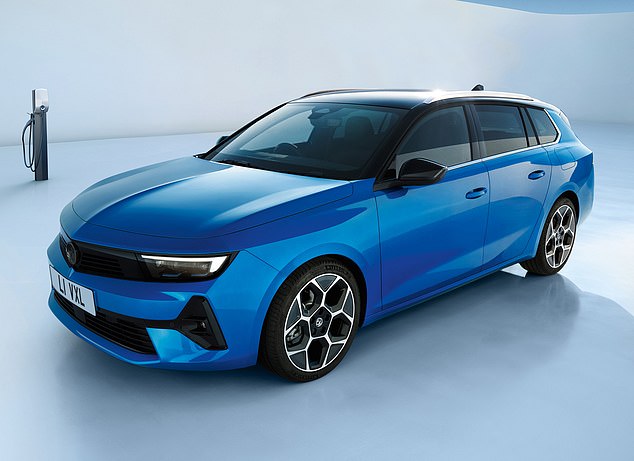 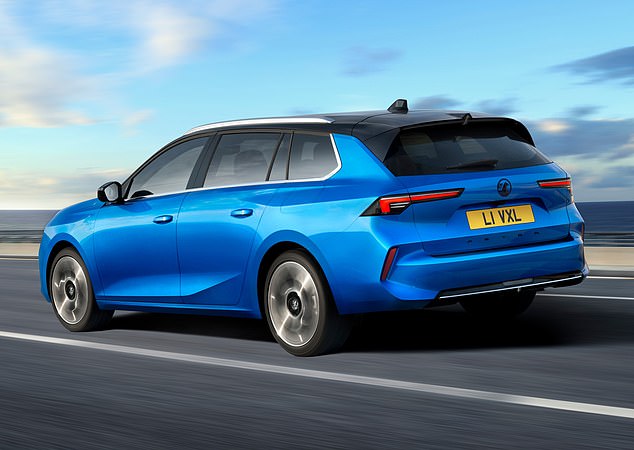 A frugal 1.2 litre 3 cylinder turbo petrol priced from £24,000 and 1.5 litre turbo diesel are also expected in power ranges from 110hp to 130hp with a six-speed gearbox as standard.

The sharp futuristic ‘face’ is a what Vauxhall calls its Vizor design, which also houses LED headlights and a front camera.

Inside is a ‘digital cockpit’ featuring a 10 in driver instrument cluster and a 10 in digital touchscreen.

Order books with exact pricing and specifications open in February for early summer deliveries. A pure electric version is expected to follow.

Will it fit in my garage? New Vauxhall Astra Sports Tourer

Transmission: eight-speed automatic gearbox as standard – priced from around £33,000.

Vauxhall has committed to selling only fully electric vehicles by 2028. Its British factories at Ellesmere Port and Luton produced 120,000 vehicles in 2019, accounting for 7.5 per cent of the UK market.

Important settings such as climate control can still be selected directly via physical switches.

Vauxhall notes: ‘For even more convenience, the retractable boot storage cover can be stowed when the moveable floor is in both the upper as well as the lower position.’

This can also make life easier in the event of a flat tyre as kits for tyre repair and first aid are stored in clever underfloor compartments accessible from the boot or rear passenger seating area: ‘This means that the kits can be reached without needing to fully unpack the boot.’

Although slightly shorter than the previous generation Astra Tourer, the wheelbase is slightly longer thanks to the short front overhang.

Though Vauxhall is a British brand, the Astra is built in Russelsheim, Germany, home of its partner brand Opel.

In July, Stellantis announced a £100 million investment in Vauxhall’s Ellesmere Port manufacturing plant to transform the site for a new era in electric vehicle manufacturing.

Ellesmere Port will become the first Stellantis plant to produce a solely battery-electric model, in both commercial and passenger versions, by the end of next year, including the Combo-e and Combo-e Life, for both domestic and export markets.

The Luton plant continues to build the Vivaro and Vivaro Life for Vauxhall, as well as vehicles for its Stellantis sister brands including Citroen and Peugeot.

Satnav is fine for going from A to B. But nothing beats a traditional road atlas to get the sense of where you are.

Yet, although two-thirds of drivers have one, most are not updating them often enough to keep up with changing travel infrastructure, says a new AA survey. 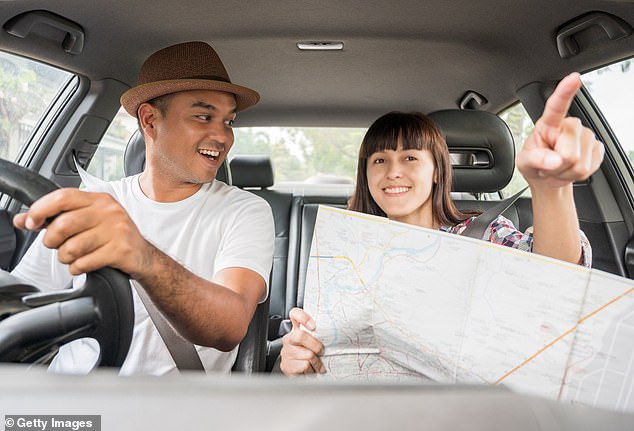 On the right track: A poll of more than 15,000 drivers reveals nearly one in five admit they have never updated their atlas

A poll of more than 15,000 drivers reveals nearly one in five admit they have never updated their atlas — and more than one in ten take more than five years to buy a new edition.

Only 1 in 14 renew their atlas every year, as recommended by the AA. The AA said its relaunched 2022 range has now sold nearly 500,000 copies as UK drivers return to the roads for post-lockdown travel and staycations.

AA President Edmund King says: ‘Many satnavs just try to re-route you back onto a blocked road, whereas the atlas can show you alternative routes.’

Electric cars dominate the magnificent seven finalists for this year’s European Car of the Year — with a lone plucky Peugeot flying the flag for petrol power.

The six battery-powered zero-emissions finalists are: the Ford Mustang Mach-E, Korea’s Kia EV6 and its sibling Hyundai Ioniq 5, and the Skoda Enyaq iV, all on sale in the UK, plus Spain’s sporty Cupra Born hot-hatch and the Renault Megane E-Tech, both of which arrive next year. 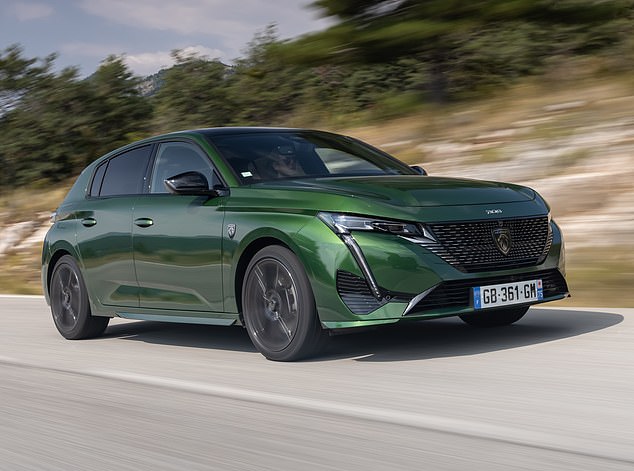 The sole internal combustion engine car shortlisted is Peugeot’s svelte 308 hatchback, pictured, available in pure petrol form from £24,000 for the entry-level 1.2 litre, or as a plug-in hybrid with an electric-only range of 37 miles from £33,000.

The automotive equivalent of Eurovision has whittled down the final seven from a long list of 38 vehicles with 61 judges from 23 countries. The winner will be announced on February 28.

SAVE MONEY ON MOTORING

Some links in this article may be affiliate links. If you click on them we may earn a small commission. That helps us fund This Is Money, and keep it free to use. We do not write articles to promote products. We do not allow any commercial relationship to affect our editorial independence.