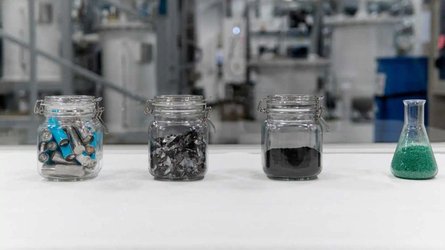 Northvolt announced that its recycling program, Revolt, has produced at Northvolt Labs in Västerås, Sweden its first lithium-ion battery cell featuring a nickel-manganese-cobalt (NMC) cathode produced with metals recovered through the recycling of battery waste.

100% of the nickel, manganese and cobalt was recycled from old batteries. According to the Swedish battery start-up, backed by several carmakers, including Volkswagen, recycling can recover up to 95% of the metals in a battery to a level of purity on par with fresh virgin material.

Performance of the new battery is on par with cells produced with freshly-mined metals.

“Recycled nickel, manganese and cobalt metals used in the battery cell were recovered from battery waste through a low-energy hydrometallurgical treatment which involves the use of an aqueous solution to isolate the metals and separate them from impurities.”

The next step will be construction of the Revolt Ett, a giga-scale recycling plant under development adjacent to Northvolt Ett gigafactory in Skellefteå, Sweden.

It’s expected that Revolt Ett will be able to recycle up to 125,000 tons of batteries per year, which should be enough to supply metals for up to 30 GWh of new batteries at Northvolt Ett (50% out of 60 GWh production).

“Having proven the validity and efficiency of its recycling process, Northvolt now turns attention to the scaling-up of recycling capacities to fulfil its aim of producing cells with 50% recycled material by 2030.

To secure this, Revolt Ett, the company’s first giga-scale recycling plant under development adjacent to Northvolt Ett gigafactory in Skellefteå, Sweden, will be expanded beyond its initial design to enable recycling of 125,000 tons of batteries per year.”

Construction will start in Q1 2022, while the plant should start operations in 2023.

The Revolt Ett will recycle lithium, nickel, manganese, cobalt and other metals (copper, aluminium) and plastics. Incoming material will come from end-of-life batteries from electric vehicles and production scrap from Northvolt Ett.

“In addition to becoming Europe’s largest battery recycling plant, Revolt Ett will be the only large-scale facility in Europe capable of recycling lithium in addition to nickel, manganese, cobalt and other metals. Recovered materials from Revolt Ett will supply neighboring Northvolt Ett cell manufacturing gigafactory with recycled metals sufficient for 30 GWh of battery production per year (half of Northvolt Ett’s total annual cell output).

Alongside direct delivery of nickel, manganese, cobalt and lithium metals into Northvolt battery production processes, Revolt Ett will recover copper, aluminium and plastics from the batteries and materials it recycles – all of which will be recirculated back into manufacturing flows through local third-parties.”

Well, that sounds like a win-win idea for both the business and the environment. Of course, initially there will be not many EV batteries, but over time it should be a circular economy, just like in the case of lead-acid batteries.