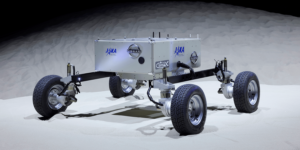 Using the new Ariya as a basis to design two prototypes led to the creation of the Single Seater Concept, which shows how the series model’s drive could power a race car. The other prototype also relies on Ariya technology resulting in a lunar rover using the e-4ORCE all-wheel-drive control.
nissannews.com (race car), nissannews.com (lunar rover)