The current BMW 5 Series is scheduled to be replaced in 2024, seven years after its launch, and our spy photographers have caught the first glimpse of its completely redesigned successor.

Wearing a bold new look that obviously mark them out from today’s car, two versions of the G60-generation 5 Series were spotted at a BMW test facility in Germany: a plug-in hybrid and the all-electric version known as the i5.

Following the imminent arrival of the iX flagship SUV and i4 saloon, BMW will launch a further seven electric cars by 2025, with several core ICE models gaining EV derivatives in the same vein as the X3-based iX3.

Prior to these images of the new 5 Series, we’ve seen battery-powered prototypes of the next-generation 7 Series, the current 3 Series and the current X1 crossover.

BMW has yet to specifically detail how it will vary its EV powertrain offering, but the current 5 Series uses the same CLAR architecture that underpins the ICE and EV versions of the new 4 Series, suggesting that its larger sibling will offer a similar powertrain line-up if it retains the platform. 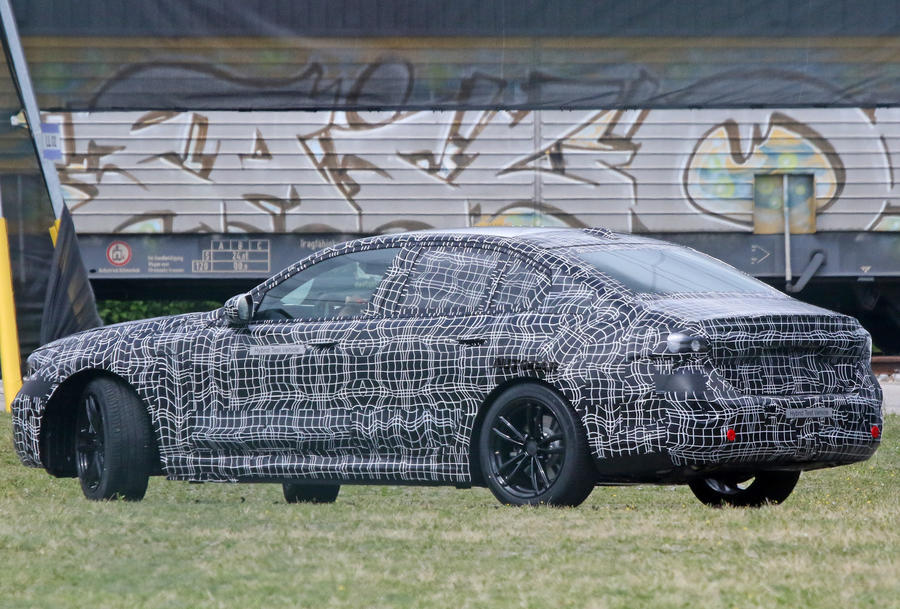 That means the standard version of the i5 could potentially be offered with both rear-wheel-drive and four-wheel-drive powertrains, with output ranging from 335bhp in the i5 eDrive40 up to 536bhp in the performance-oriented i5 M50 xDrive (if it follows the model-naming strategy of the i4).

The plug-in hybrid versions of the new 5 Series will likely retain their current 530e and 545e badging, with electrified four-cylinder and six-cylinder petrol engines respectively.

A range of ICE-only variants is likely to continue on sale, at least initially, although it remains to be seen whether BMW will reintroduce the 523bhp V8-powered M550i range-topper, and the full-fat M5 will almost certainly adopt some form of electrification.

Our first look at the new 5 Series reveals how radically it will be visually distinguished from the current car. Notably, the controversial ‘vertical’ grilles from the 4 Series and the new M3 are absent, with the new 5 Series instead adopting what looks like a more familiar horizontal arrangement, which will be blanked-off for the EV.