Tesla has gotten used to pushing like crazy toward the end of each quarter to ship as many vehicles as possible to customers.

Naturally, this approach has led to increased costs, with the company spending heavily on delivery fees, employee overtime and temporary contractors to make those deliveries happen before the end of the respective quarters.

Well, it appears that Q4 2021 will be a bit different, as Tesla CEO Elon Musk has sent an email to all employees on November 26 asking them to worry more about costs than delivering as many cars as possible during the final part of the current quarter.

First brought forward by Sawyer Merritt on Twitter, Musk’s email appears to be a follow-up to another message he sent in late Q3 2021 where he said that starting in Q4 2021/Q1 2022 Tesla would start to spread out deliveries more to reduce end of quarter waves.

Here’s a full copy of the email the chief executive sent to employees on Friday, courtesy of Drive Tesla Canada via David Lee. 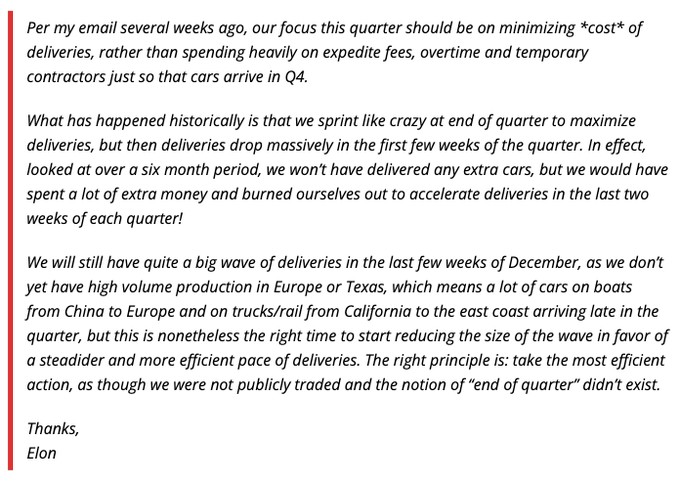 This is an interesting change of strategy, and it highlights the fact that the traditional end-of-quarter push did not do much to increase deliveries in the long run. At best, it made the company look good for investors while increasing its costs.

As Elon Musk points out in the letter, while Tesla’s deliveries typically rise at the end of a quarter, they drop massively in the first weeks of the following quarter. Actually, over a six-month period, the automaker doesn’t really deliver any extra cars, but it spends a lot of money and energy to accelerate shipments in the last two weeks of each quarter.

As long as Tesla manages to deliver the same amount of cars overall by spreading out the end-of-quarter wave, this sounds like the more logical thing to do.

Now, while Tesla’s head honcho says the company will still have a big wave of deliveries in the last few weeks of December, he tells employees that “this is nonetheless the right time to start reducing the size of the wave in favor of a steadier and more efficient pace of deliveries.“

It looks like a sign of maturity in the way Tesla approaches manufacturing and quarterly earnings, and the recommendation Musk makes at the end for employees to “take the most efficient action, as if we were not publicly traded and the notion ‘end of quarter’ didn’t exist” shows it.