After an eight-year odyssey and frustrating delays, Lucid Motors (finally) has everything in place to stake an electric claim in America: Cars, an Arizona factory, 2,000 employees and a growing network of “studio” showrooms. Now all Lucid needs is customers, including New Yorkers who’ve been poking curious heads inside the automaker’s just-opened studio in Manhattan’s trendy Meatpacking District.

It doesn’t hurt to park a Lucid Air out front, in gallery-white paint that highlights the fresh lines, dramatic Glass Canopy and evidently electric approach. I’m here for a shotgun ride in one of about 110 pre-production models that have rolled off the assembly line in Casa Grande, Ariz. The electric sedan, which will boast as much at 1,080 horsepower in range-topping Dream Edition form, appears “this close” to production, with cars currently undergoing final validation for software, craftsmanship and road testing. Lucid executives are determined to shrug off pandemic delays and produce fewer than 1,000 cars — including an initial run of 500 Dream Editions — by year end. The company claims it has more than 10,000 fully refundable reservations.

“We would have liked to have had cars in customers’ hands earlier this year,” said Derek Jenkins, the former Mazda designer and Lucid’s senior vice-president of design and brand. “But getting it right is what’s important, not putting a car out there that’s plagued with issues. We have one shot to make a great first impression.”

Next year brings the real test, with Lucid targeting production of 20,000 cars and a restorative $2.2 billion in revenue. The 20,000-unit goal is an ambitious number for any high-end luxury automobile, let alone an electric newcomer: the Mercedes-Benz S-Class, typically America’s best-selling model that transacts above $100,000, hasn’t sold 20,000 units in America in a single year since 2015. Mercedes found about 12,500 S-Class buyers in 2019, and only 6,600 in a pandemic-rocked 2020. 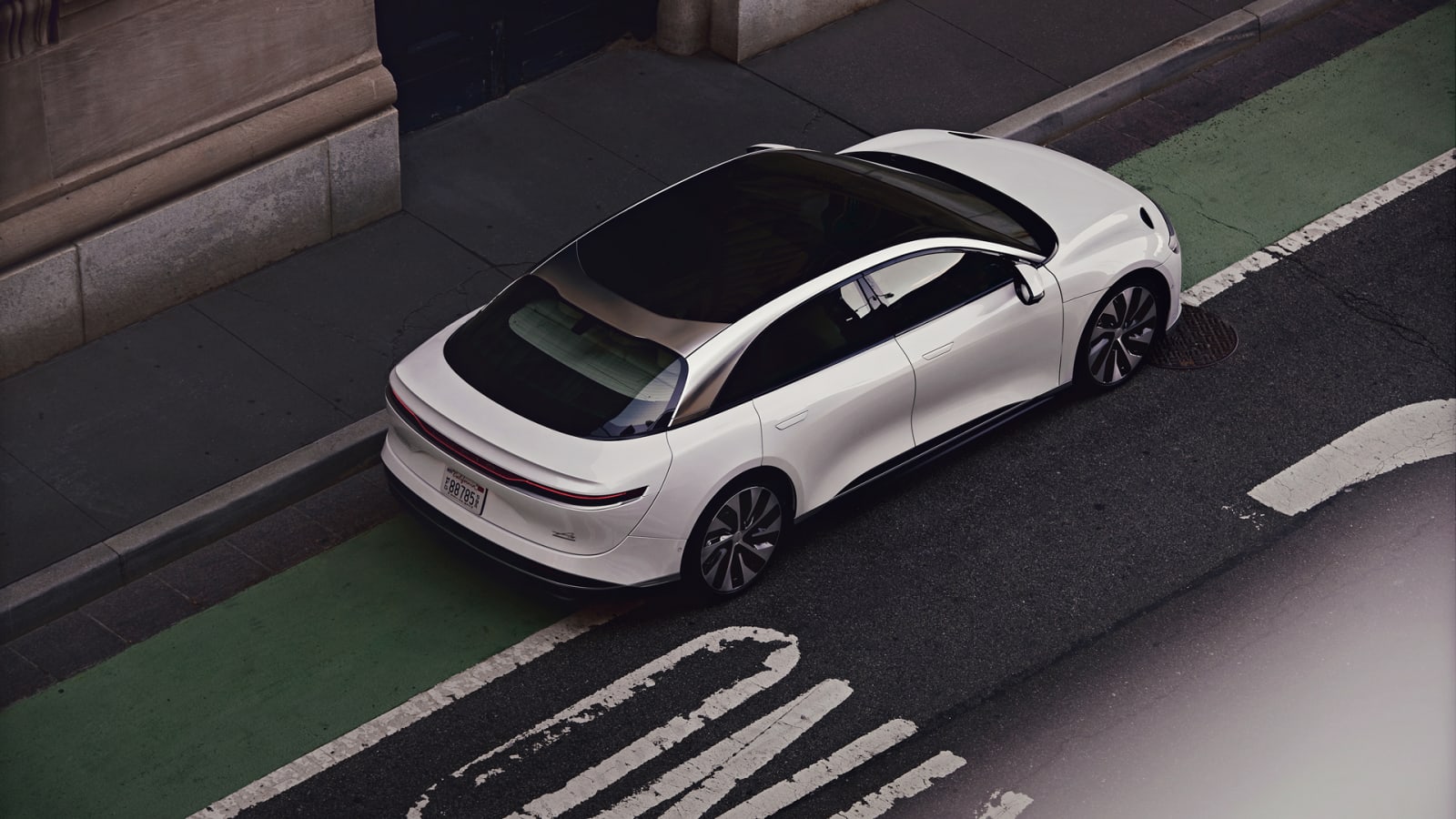 To get there, Lucid is playing up the Air’s luxury, performance, spaciousness and EV efficiency, including the $139,000 Grand Touring model I’ll be riding in today good for 800 horsepower and 517 miles of range. If the EPA concurs, that would be the longest range of any EV in history. Air Pure and Air Touring models (at a respective $77,400 and $95,000) are slated to follow, which will be on closer financial par with Tesla’s Model S. Exactly when those more-affordable models will arrive is a subject of great interest, with Lucid now saying they’ll reach showrooms sometime in 2022.

Pure and Touring versions (with 480 or 620 horsepower) harness single-motor, rear-drive powertrains with 406 miles of estimated range, versus dual-motor, AWD Grand Touring and Dream Editions. Lucid hasn’t settled on a destination charge, but every Air is eligible for a $7,500 federal tax credit, in addition to state or local incentives.

“We’re trying to get the people in transition,” from fossil-fueled models that still hold 97% of the market, Jenkins said. “It’s elegant and clearly electric, but not so futuristic or jarring that you’d alienate a traditional Benz or BMW buyer. We want them to see a beautiful car and say, ‘I’d gladly replace my gasoline car with that.’” 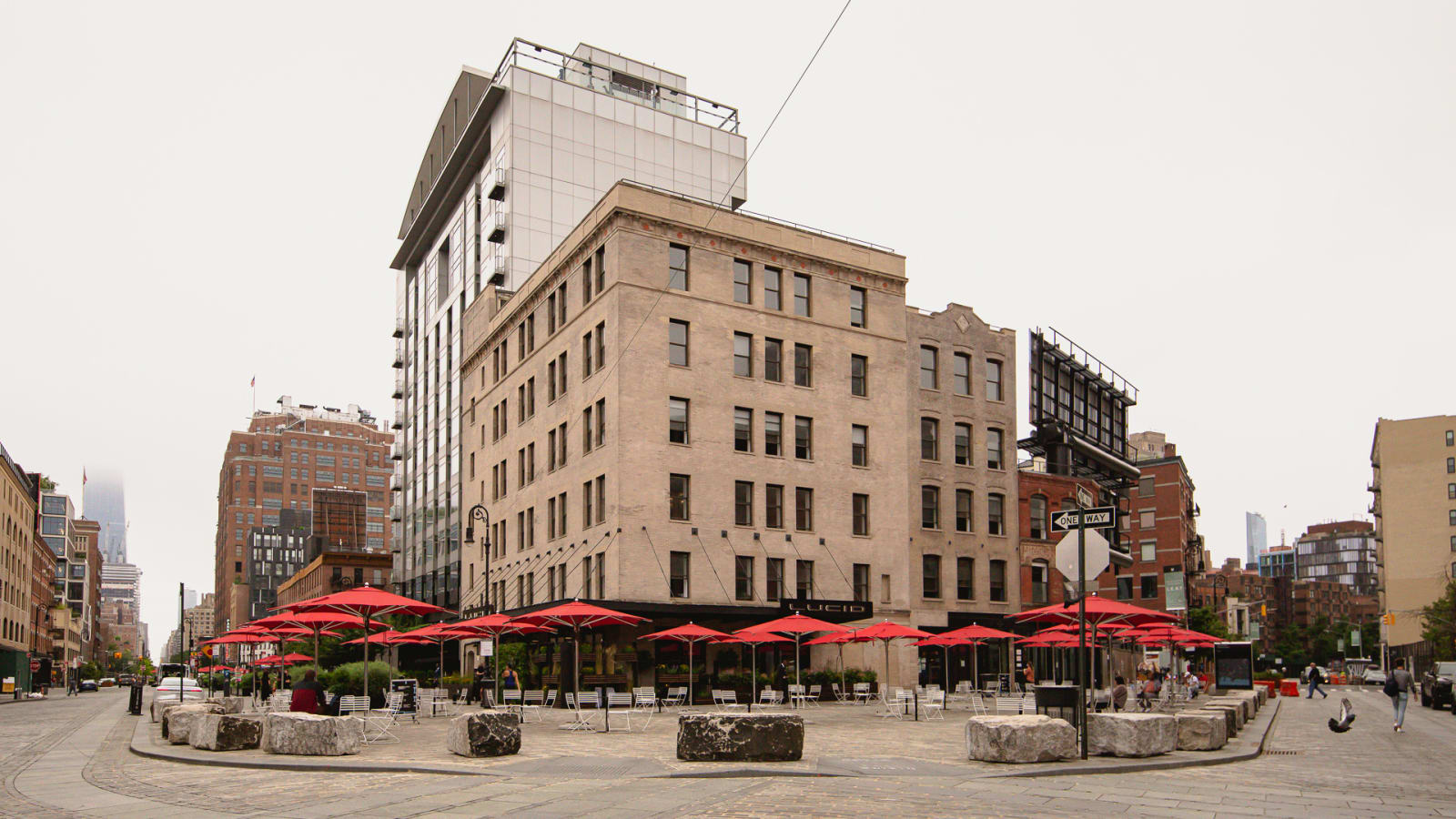 Lucid is strategically locating its studios in bustling areas with heavy foot traffic, including some malls. The New York studio is Lucid’s eighth, with Chicago, Boston and Phoenix locations slated to open by year-end, and 25 total by the end of 2022.

“That covers about 90% of America’s key EV markets and demographics,” Jenkins said.

Lucid plans to open service and delivery centers to support each showroom, including one in New Jersey for New York-area owners. With sedans falling sharply from favor since Lucid’s 2013 founding, the company plans to add a midsize electric SUV to its lineup in 2023. It will be based on a “Project Gravity” concept it intends to show next year, with an exterior footprint similar to a BMW X5 or Audi Q8. 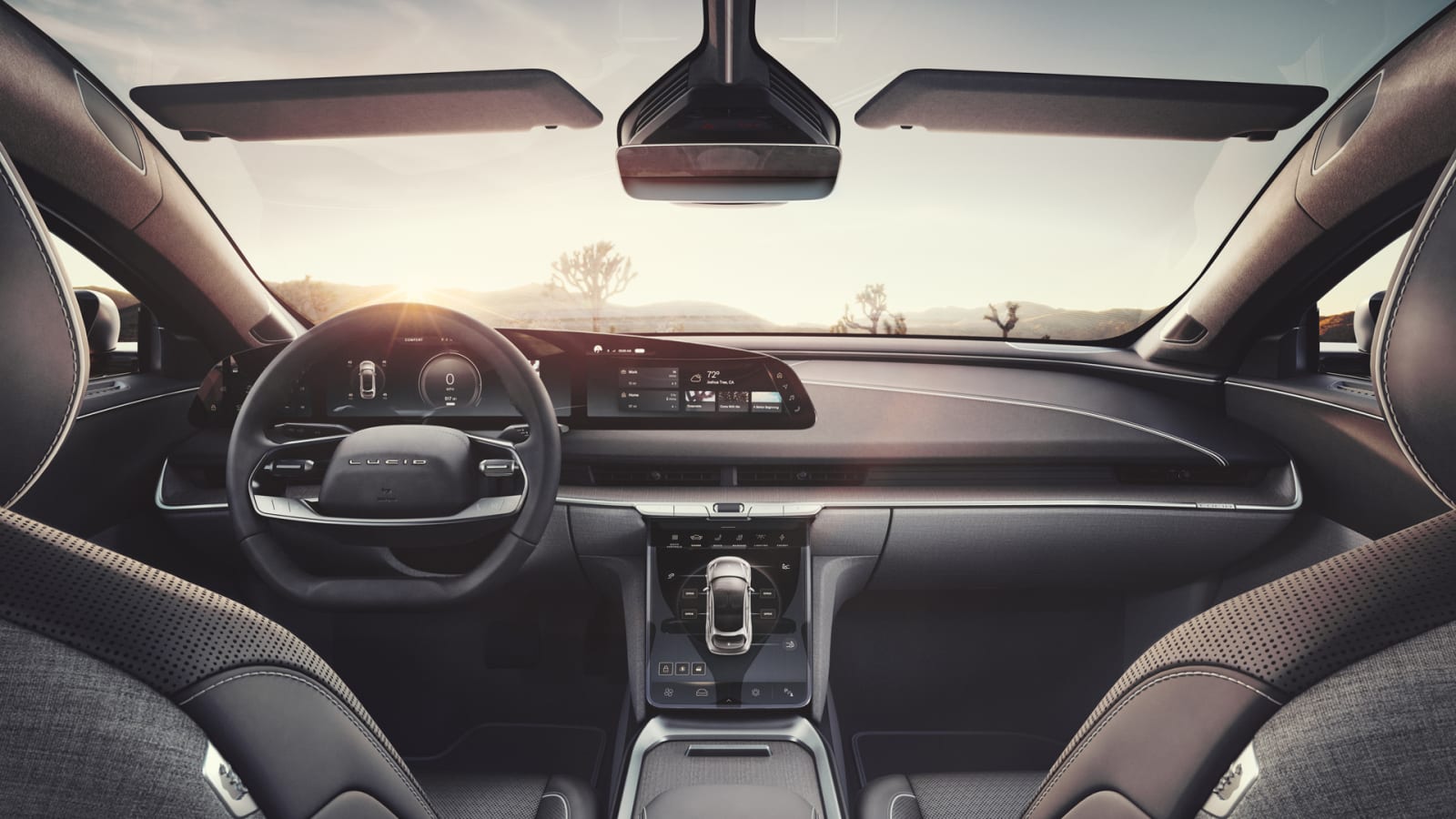 Leaving the virtual world, it’s time for a real-life ride along, with a Lucid tech at the wheel. The Air makes a legit luxury impression, even if the cabin suggests “$80,000 car” more than “$160,000 car.” The Air leans into a familiar, clean-lined EV aesthetic, but with superior materials and build quality to what you’d find in Tesla’s spartan quarters. That includes the optional “Santa Monica” interior, with rich wood, real metal and a pleasing textile trim and upholstery that blends Alpaca wool and recycled plastic fibers. Nappa leather remains available. This early-build car doesn’t have its radio or navigation system hooked up, but the vast screen displays, part of the Lucid UX interface, look ready for their closeup. Onscreen controls replace some traditional analog switches, including for the seats and glovebox; though there’s an oversized volume knob and hard switches for temperature and fan speed, all welcome.

As advertised, the back seat offers scads of headroom and legroom, though seat cushions are positioned closer to the floor than in most luxury sedans, and there’s no foot space below the front seats. Executives said single-motor models, with smaller, roughly 90 kilowatt-hour battery packs (versus 113 kWh in AWD models) will carve out a deeper “foot garage” in back. No complaints with the folding back seat that opens up enough room for a 6-foot surfboard, accessed via a striking clamshell hatch opening. And the enormous, 10-cubic-foot frunk is among the industry’s largest. 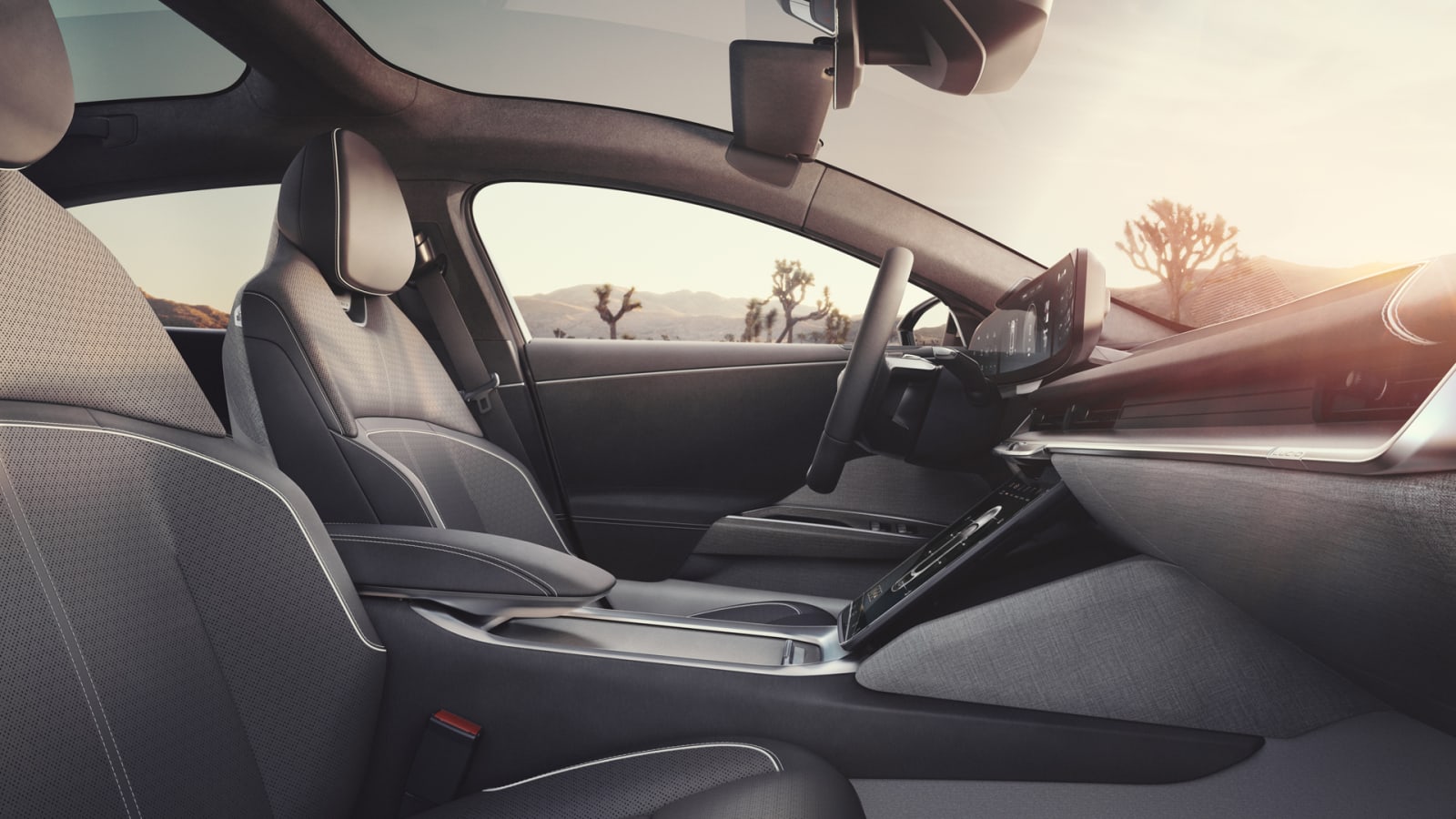 A brief shotgun ride is no replacement for a test drive, but it’s enough to make us eager for an upcoming test. Is the Dream Edition really 2.5-seconds-to-60-mph quick? And how about that claimed, 9.9-second quarter mile, enough to hit 144 mph in the space of five New York blocks? Again, hard to say. But seeming to anticipate my thoughts, the Lucid’s driver shows off a few impressive, kidney-punching bursts of electric acceleration on the West Side Highway.

The Air’s ride feels on the firm side over Manhattan’s battered pavement; a much-vaunted air suspension has been shelved for now, replaced by conventional springs and semi-active shocks. But the powertrain is cemetery-quiet and massively strong. The Newark, Calif.-based company, led by Wales-born CEO Peter Rawlinson (famously, the former Tesla Model S chief engineer), sees in-house tech development as a major competitive edge. That includes a compact powder keg of an electric drive unit — motor, transmission, inverter and differential — that weighs just 165 pounds, and could squeeze into a carry-on bag. Or, as Edson notes, lighter than the 289 cubic-inch V8 engine block in the ‘68 Mustang he owns. Rawlinson claims a single unit could ultimately deliver more than 670 horsepower and 4,400 pound-feet of torque. AWD models carry two units. You do the math.

The Lucid’s industry-topping, 900-volt electric architecture — versus 800 volts in the Porsche Taycan, and 400 in Teslas — allows ultra-fast DC charging, restoring up to 300 miles of range in 20 minutes flat, or up to 20 miles per minute. The “Wunderbox” charging unit is designed for bi-directional charging, allowing a Lucid to power a home during a power outage, store home energy (via residential units now coming into the marketplace) or return juice to the grid to balance out peaks. The company is also developing its own Energy Storage Systems (ESS) for commercial and home use.

We don’t get a chance to futz with the Lucid’s driver-assistance features, which I suspect aren’t fully operational, either. But the company touts 32 onboard sensors, including the industry’s first true Lidar unit and a driver-monitoring camera, for Level 2 or even Level 3 semi-autonomy.

With the impatient eyes of industry, media and Wall Street all over Lucid, the company has bought time and a financial lifeline via a tie-up with a Special Purpose Acquisition Company (SPAC) called Churchill Capital IV. Such “blank check” shell companies have become a popular way to lure capital and go public for EV companies including Nikola, Fisker and Lordstown Motors. The merger, which Lucid now expects to close in the third quarter, brings $4.5 billion in fresh funding, including $2.5 billion from the Saudi sovereign wealth fund that will own roughly 85% of the company. The maneuver gave Lucid an initial “pro forma” valuation of $24 billion. That dwarfs the valuations of Nikola, Fisker and Lordstown, each pegged below $4 billion. Put another way, investors are putting more faith in Lucid than those other three start-ups combined.

Like Tesla before it, Lucid — politely known as “revenue-free” in financial parlance — expects to burn through hundreds of millions more dollars before it turns anything resembling a profit. But Lucid’s optimism includes projected annual revenue gains of nearly 200%, beginning with $2.2 billion next year, and culminating with nearly $24 billion in revenue by 2026. Lucid expects to sell nearly 50,000 cars in 2023, and as many as 500,000 a year by 2030, which would of course require more factories.

For certain folks, the merger’s critical…