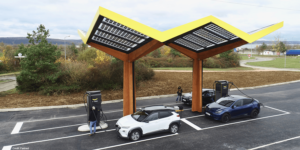 Charging provider Fastned has opened its first four fast-charging locations in France. Five more will follow in the next few weeks. The nine stations are to start small but will be expanded in the future.

The Fastned sites now open are located at the following service stations: Gevrey-Chambertin Ouest (A 31, Dijon), Écot (A 36, Montbéliard), Pont Chêne d’Argent (A 39, Dole) and Pont Val de Saône (A 39, Dole). The other five hubs will open in the next few weeks along the Autoroute du Soleil (A6). All nine hubs are located along the motorways between Paris-Dijon and Dijon-Lyon.

Almost exactly one year ago, Fastned announced that it had received its first order from France when the motorway operator Autoroutes Paris-Rhin-Rhône (APRR) commissioned the Dutch company to build and operate the nine charging parks.

Each location has four charging points with up to 300 kW per charging point and can be expanded to up to twelve charging points if required. Unsurprisingly, photos show two Alpitronic Hypercharger HYC300 with two charging points each under a Fastned-typical solar roof. This means that the Dutch company is also using the charging station model from South Tyrol, which is popular with many CPOs.

Including the five locations that Fastned opened in Germany in November, the Dutch company now has a total of 176 charging parks in six countries.

“I am very happy that APRR took a lead in enabling parties like Fastned to build charging infrastructure in France by reaching out to the market,” says Fastned CEO Michiel Langezaal. “Making available large locations via long term leases is crucial for the construction of high-quality charging infrastructure.” In addition, Fastned is part of the French Ministry of Energy Transition’s concept to build charging stations for electric vehicles nationwide by 2022.

“The realisation of charging infrastructure along highways is key factor in the transition to electric mobility in France and the ambition to reduce French CO2 emissions,” says Pierre Courgeon, Fastned Country Manager France. “This first project is just the beginning as Fastned aims to be a key player in France, with a large national network providing freedom to electric drivers with the level of quality of service they are looking for.”