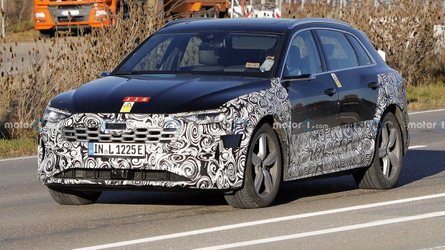 Audi’s first mass-produced electric vehicle, the e-tron SUV, is getting a little long in the tooth. First hitting the market in 2018, the e-tron was joined by a Sportback version last year. Both offer plenty of tech, good range and decent performance, however with increasing competition the time for a facelift is upon us.

The 2022 Audi e-tron and its Sportback equivalent have both been spotted in testing recently with minimal camouflage, giving us a good idea as to what we should expect from the facelift. Revised bumpers, a new grill and redesigned headlights are the main takeaways. Per Autocar, the updated e-tron will also get a new battery capable of over 373 miles per charge.

In 2023, the facelifted e-tron will be joined by the Q6 e-tron. Originally people speculated that the Q6 would actually replace the e-tron, however this is not the case. The Q6 will be marginally smaller and will therefore sit below it. The Q6 e-tron is currently being developed alongside the Porsche Macan EV, with both vehicles being based off the same PPE chassis.

The e-tron itself will eventually be replaced in 2025 by the Q8 e-tron, which will likely be Audi’s flagship electric SUV. Given it is so far out, details on the Q8 e-tron are scarce.

Meanwhile, the 7-seater Q5 e-tron just launched in China. Based off the VW ID.6, don’t expect it to ever be sold outside of the Chinese domestic market. So, there you have it: Q4 e-tron, Q5 e-tron, Q6 e-tron and e-tron – in that order. Confused? We wouldn’t blame you. At least when the Q8 e-tron arrives in 2025 things will get a little simpler.