In the 1930s and 1940s, the Rural Electrification Act wired farms to the grid, turning on lights across the American countryside. Parallel efforts added phone service in these sprawling, sparsely populated areas. At long last, farm families and small-town residents could call a faraway relative without driving to find a phone and study at night without using a generator.

Now, rural areas are working to connect in new ways, through improved digital and cellphone networks, as well as alternative forms of transportation. Researchers from the U.S. Department of Energy’s (DOE’s) National Renewable Energy Laboratory (NREL) are joining small towns across America to expand affordable, convenient, and energy-efficient transportation choices.

“Cities are huge population centers, but about 60 million Americans live in small towns and farm country,” NREL Rural Mobility Project Lead and Transportation Behavior Analyst Andy Duvall said. “Just like people in New York, Chicago, or Dallas, they need to get to the doctor’s office, school, and grocery store — but there aren’t any subways, transit buses, or taxis, and critical destinations can sometimes be a day’s travel away.”

Members of these communities without cars of their own or the ability to drive can be largely cut off from the world. An array of DOE-funded projects is creating mobility options for rural populations, most importantly for low-income, aging, and disabled individuals who miss out on jobs and medical appointments unless family and friends can drive them places.

NREL, DOE, and other project partners are taking lessons learned in urban areas and applying them to these smaller towns and rural communities. In support of the U.S. Department of Transportation’s (DOT’s) Smart City Challenge, NREL Mobility Systems Project Leader Stan Young was embedded in Columbus, Ohio, for four years.

Young shared the laboratory’s expertise and resources with municipal staff and consultants, while observing firsthand the city’s mobility challenges. The goal was to spur economic growth, improve citizens’ quality of life, and decrease the city’s carbon footprint through more energy-efficient, convenient, and affordable ways to move people and goods.

In the end, the city arrived at a range of solutions that combine on-demand, automated, connected, electrified, and shared mobility options. Data collected by the project team show that access to on-demand transportation services led to more consistent visits to doctors for preventive healthcare, self-driving shuttles made it possible to deliver more than 130,000 meals during the COVID lockdown, and new transit hubs gave workers access to a pool of more than 20,000 additional jobs.

“Until now, the emerging mobility focus has mostly been on big cities. Small towns and rural communities deserve to benefit from breakthroughs in transportation technology, too,” Young said. “Building a better understanding of travel patterns and needs in these areas is the first step.”

NREL and its partners are discovering the transportation issues unique to rural areas as they work with the five communities involved in the initiative. They already knew that low population density, lack of centralized services, and long stretches of road would require a different approach. 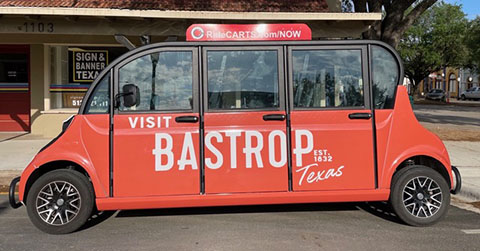 As the initiative progressed, it became clearer that a number of other factors compound those challenges. Researchers’ observations in Bastrop, Texas, reflect patterns among its 52,000 residents that are emerging in all the communities involved in the project.

Rural areas and those outside cities typically have fewer employment opportunities in the immediate vicinity, meaning workers need to commute farther or move out of the community to find viable jobs. At the same time, the lack of transportation infrastructure can prevent companies from choosing to relocate to these communities.

More than one in five Americans aged 65 and up live in rural areas. As people get older and lose the ability to drive, limited transportation options present barriers to vital medical and social services.

Other issues in small towns and rural areas include the long distances that sometimes must be traveled to reach schools, hospitals, libraries, and grocery stores. In addition, these communities rarely have the funds and volume of demand needed to support a traditional public transportation system.

Lack of transportation options can be compounded by a shortage of reliable broadband internet and wireless services. These conditions can force younger residents to move to cities to find work or skip college because of difficulties accessing online educational resources. 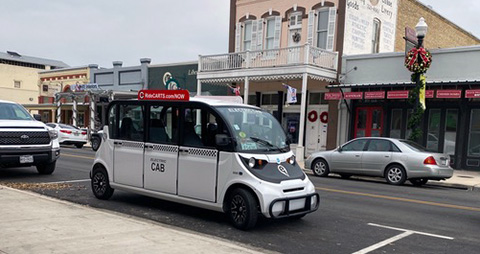 “All of these stumbling blocks can be overcome, but it will demand a different set of solutions for small communities than what we came up with in Columbus and other larger cities,” Duvall said.

In Bastrop, just an hour southeast of Austin, the team has launched an on-demand ride service using electric vehicles. Trips on the ride service are currently free of charge, enabling passengers to meet practical mobility needs such as getting to medical appointments, grocery stores, and jobs. Frequently taking the place of larger conventional vehicles, the system’s electric vehicles translate into lower per-trip fuel consumption and emissions.

National commercial ride hailing services such as Uber and Lyft can be tough to find in small town settings. This can be attributed in large part to spotty network coverage and other technology shortcomings in these areas, lower population density, and less frequent cellphone ownership and credit card use.

The Bastrop system has adopted an alternative model that allows riders to request electric cab or van service with a phone call, as well as via a mobile app. Because the rides are free, passengers do not need to worry about paying by credit card or other means.

Now that the system has operated for six months, the NREL team is examining data on length, number, frequency, and purpose of trips, in addition to displacement of trips using single-occupancy vehicles. Initial results reflect a high demand for the new service.

“While this might seem like old news to someone in a big city, it really is revolutionary for a person in a small town to have a vehicle available to take them from point A to point B in a matter of minutes,” Duvall said.

Duvall noted that riders also seem to like the electric vehicles, and that increased comfort and familiarity with the technology in the community could lead to greater interest in electric vehicle ownership, too. Until now, adoption of electric vehicles has lagged in rural areas when compared to urban markets.

The Bastrop system’s electric vehicles are charged using electricity from the Texas grid, which relies on one of the country’s highest proportions of renewable energy sources. The electric vehicle rides replace transportation in conventional gas-fueled vehicles, resulting in reductions in petroleum use and life cycle emissions.

Driving Change Past the County Line

The rural mobility team is exploring additional mobility options in other towns. While work continues in Bastrop and the four communities in the original demonstration projects, researchers are discussing partnerships with more communities in new locations.

NREL completed a related project in Innisfill, a Canadian town north of Toronto of approximately 40,000 people. Comparable in size and use patterns to some of the U.S. communities being studied, the town focused on improving transportation to serve its growing population more effectively,…

Read More:Country Roads, Take Me Home — In An Electric Car