Some say that car ownership won’t be a thing of the future.

The future is electric …

And it could be much more than that.

It’s about on-demand cars, virtual showrooms, and an end to insurance, maintenance and commitment.

This is where we get super clean and wildly convenient.

EV sales broke just about every previous EV record in 2020, even in the middle of a pandemic. 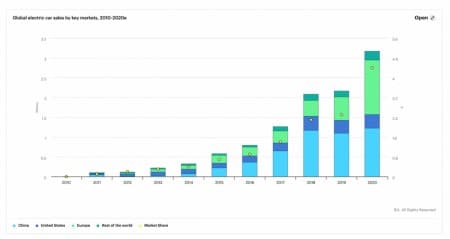 EV sales soared by over 40%, while overall car sales dropped by 14%.

And we’re just getting started and now there’s another potential huge disruptor. This one won’t hinder the mainstreaming of EVs, but it could help rock the auto industry to its core.

According to one analyst, the car subscription market is set to top $12 billion by 2027.

Big names are jumping in on this opportunity too, from Volvo and Porsche to Hertz and others.

Both Facedrive and Steer are tech-driven innovators working in the EV space, where the most lucrative tie-ins appear to be shaping up as major investment opportunities.

Facedrive has made it its mission to turn eco-friendly services into profitable tech-driven verticals.

And Steer is on the right track. It looks like they know what people want, especially one of our most important consumer classes: millennials.

Millennials don’t like hassle, and they want everything on demand, without commitment.

For many, the car ownership experience is a dismal one. Steer wants to put an end to haggling with dealers, complicated financing, long-term commitments and even insurance and maintenance. Steer’s subscription service provides something consumers have been after for years: flexibility.

We think Steer is one of the answers to the last remaining hurdles of full-on adoption of EVs: cost and charging technology.

A subscription to Steer comes with your own concierge who delivers your car wherever you need it and assists with charging, either at home or on the road. And there’s no mileage limit—one of the banes of car leasing.

With Steer, members get their own virtual gallery to fit various budgets, including everything from the Audi e-Tron and the Hyundai Kona to your favorite Tesla, and beyond. 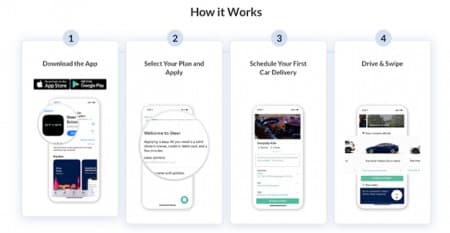 The growth runways look highly promising. Already, the company reports that 70% of Steer members have never even driven an EV before. In other words, new converts could be coming easily.

One Giant and One In the Making

That connects another big name into the Facedrive story to help exert positive change in the auto industry. And the EV industry tie-in couldn’t come at a better time.

We think It’s all positioning Steer to become the Netflix of EV car ‘ownership’.

And Facedrive itself  is aiming to become the Netflix of a number of other eco-friendly verticals too.

As far back as 2016, Facedrive was coming up with its potential solution to help reduce the massive pollution caused by ride-hailing. It’s answer to Uber and Lyft? The 2019 launch of the first carbon-offset ride-sharing platform in Canada, giving riders a choice of EV or hybrid and planting trees in cooperation with local authorities along the way.

It also pioneered a model for carbon-offsetting food and pharma deliveries.

That didn’t stop it from jumping in on the front lines of the COVID-19 battle, either. It developed TraceSCAN, the Ontario government-backed COVID contact-tracing wearable technology that is aiming for rapid manufacture and deployment to help enable essential workers to get back on the job – safely – and in turn to help enable the economy to reopen, and stay open.

From Steer to TraceSCAN and Facedrive Foods, this Canadian ‘Silicon Valley’ style company has focused on people and the planet, without sacrificing the pursuit of profits.

It’s straddling multiple potential megatrends at once, and its revenue growth potential might be what investors are eyeing. And the abrupt shift in consumer behavior says Facedrive (TSX.V:FD; OTCMKTS:FDVRF) is definitely one to watch.

Other companies to watch as the electric vehicle boom accelerates:

Tesla Inc. (NASDAQ:TSLA) has emerged as one of the fastest-growing stocks of all time. And that’s a big deal for the electric vehicle market. As one of the world’s most exciting -and important- car makers, it has made going green a must in this incredibly competitive industry. Its modern design has become an industry standard. Tesla has single-handedly made electric vehicles cool, and has fueled the dramatic rise in this burgeoning market since its inception.

Elon Musk is truly a visionary of the times. From his electric vehicle innovations and space ambitions to his forward-thinking approach to cryptocurrencies, Elon Musk may well become the first trillionaire, and Tesla shareholders are set to ride the wave. In fact, he released the first Tesla Roadster nearly 15 years ago, making electric vehicles exciting at a time when people were making fun of first-gen electric vehicles. Since its IPO, Tesla’s stock has skyrocketed by over 18,000%. Largely thanks to its innovative approach to the market.

It’s not just about electric cars, either. Tesla has been going wild with its solar and battery business, as well. Tesla’s Solar Roof project has the potential to change the way houses built in the future. It replaces traditional roofs with stronger, and arguably more aesthetically pleasing, solar panels that can power your entire home. And it’s even one of the cheapest sources of electricity in all of the United States.

It wasn’t so long ago that analysts and investors alike were ready to write off their losses and give up on electric vehicle manufacturer Nio Inc (NYSE:NIO). But China’s answer to Tesla’s dominance powered on, eclipsed estimates, and most importantly, kept its balance sheet in line. And it’s paid off. In a big way. Nio Tesla’s largest competitor in China, has also started to offer a batteries-as-a-service concept, in which car buyers can ‘lease’ the battery of their vehicle and save as much as $10,000 on the price of a new vehicle, while also offering buyers the option to swap batteries after a few years of use.

This could be huge for Nio, which is already making major moves. In fact, just last fall, Nio revealed a pair of sedans that even the biggest Tesla die-hard would struggle to pass up. The vehicles, meant to compete with Tesla’s Model 3, could be just what the company needs to pull back control of its local market from Elon Musk’s electric vehicle giant.

Apple (NASDAQ:AAPL), has always been a pioneer in the tech world. Ex-CEO Steve Jobs paved the way to a greener future for the company and the industry as a whole.  From the products themselves, to the packages they came in, and even the data centers powering them, Steve Jobs, and now Tim Cook have gone above and beyond to cut the environmental impact of his company, and help win over a new generation of investors.

And now, it’s even getting into the transportation business. “We’re focusing on autonomous systems. It’s a core technology that we view as very important. We sort of see it as the mother of all AI projects. It’s probably one of the most difficult AI projects actually to work on.” Apple CEO Tim Cook on Apple’s plans in the car space. Electric vehicles aren’t likely to be left out, either…

Apple’s rumored electric vehicle means that more active material can be packed inside the battery, giving the car a potentially longer range. Apple is also examining a chemistry for the battery called LFP, or lithium iron phosphate which is inherently less risky than lithium-ion batteries, which could be a game-changer for the industry as a whole.

Old school automakers shouldn’t be ignored in the alternative transportation boom,  either. Toyota Motors (NYSE:TM),  for example, is a leader in the industry. Beginning with the Prius, Toyota has been on the cutting edge of green transportation for years and years. And now, it has developed a fuel cell system module and looks to start selling it after the spring this year in a bid to promote hydrogen use and help the world achieve carbon neutrality goals, the world’s largest car manufacturer said in February.

According to Toyota, the new module can be used by companies developing fuel cell (FC) applications for trucks, buses, trains, and ships, as well as stationary generators.

The fuel cell system module can be directly connected to an existing electrical instrument provided with a motor, inverter, and battery, Toyota said, noting that the modularization significantly improves convenience.

The boom in electric vehicles success has also fueled a boom in other EV-related companies. Blink (NASDAQ:BLNK), for example, an electric vehicle charging company, has risen by over 300% in just a few months, and the sky is the limit for this up-and-comer. And that’s great news for investors, as well.

All in all, Blink Charging really is a mature company,…

Read More: Could This Be One Of The Best Ways To Play The EV Boom This Summer?