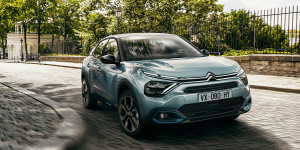 With the Citroën ë-C4, another electric model from the Stellantis Group now gets more range – with a difference from the other models. In addition, the brand has integrated a new feature in the C5 Aircross Hybrid PHEV model to increase the electric driving usage.

With the recent technological improvements also introduced for other e-CMP models, the WLTP range of the ë-C4 increases by seven kilometres to now 357 kilometres. With only two per cent more standard range, the increase here is somewhat smaller; other models could increase by up to eight per cent with the update. However, Citroën says that the range in real-world use should improve by almost 30 kilometres, depending on the operating conditions.

One reason why Citroën’s increase in range is less pronounced: in the press release, the brand only mentions two of the three measures that were implemented in other models. In future, the ë-C4 will also have the modified gear ratio and the new heat pump, which can be controlled more precisely by means of a hygrometric sensor in the interior. However, the French do not mention the change to more efficient tyres with the A+ label – because the ë-C4 has already been delivered with A+ low rolling resistance tyres since its market launch, as a Citroën spokesperson confirmed again when asked by electrive.net. We already pointed out the various efficiency measures of the only compact model of the e-CMP vehicles in our driving report from December 2020.

The 100 kW electric motor and the 50 kWh battery remain unchanged. Stellantis had previously announced an increase in range for the Peugeot e-208 and e-2008 models as well as the DS 3 Crossback E-Tense and, a little later, for the Opel/Vauxhall Corsa-e and Mokka-e electric cars. Since these models were not yet on A+ tyres, the potential for range increase was greater here.

Citroën has also implemented an update for its PHEV model C5 Aircross Hybrid. Since October, its users in France and the UK have been notified by their vehicle when it is not charging regularly. The ‘Plug-in Reminder’ was applied via an OTA update and, according to the announcement, is intended to help customers “optimise the performance of their plug-in hybrid and further reduce their environmental impact”.

Specifically, the notice is played on the infotainment display after five days or ten trips without charging – once a day. If the vehicle is not charged for 30 days, the notification appears twice a day. However, the function does not have any other consequences besides the notification field. The feature is to be introduced in other countries in early 2022 and will also be available in the C5 X Plug-in Hybrid in the future.

Citroën states that 55 per cent of journeys under 40 kilometres with Citroën PHEVs are already made purely electrically. On average, customers would charge their vehicle one to two times per 100 kilometres – with a standard range of 55 kilometres in the C5 Aircross Hybrid.

While the ‘Plug-in Reminder’ is aimed more at individual drivers, Citroën has also launched ‘PHEV Connect’ as a service for fleet managers. The system relies on the Citroën Connect Box to transmit telematics data about the vehicle. This is intended to provide fleet managers with accurate information on usage and to enable them to initiate “measures to influence driving behaviour”. Data such as charging frequency, percentage of use in electric or hybrid mode, and fuel consumption should enable them to reduce the total cost of ownership. For this purpose, ‘PHEV Connect’ has a feature that calculates the potential savings through better driving behaviour and higher charging frequency.