The overall results stand at:

The plug-in electric car sales of BMW and MINI brands more than doubled to over 83,000 in the second quarter and over 153,000 in the first half of the year.

Both results are record highs, and the plug-in market share improved to a record 11.85% of the total BMW/MINI volume.

One of the things that make us especially happy is that BMW Group significantly increased its all-electric car sales:

“With 153,267 units sold in the first half of 2021, the BMW Group grew its sales of both fully-electric and plug-in hybrid vehicles by 148.5 percent year-on-year – making electromobility a major growth driver for the company in absolute terms as well. Sales of fully electric vehicles increased by 183.9 percent to a total of 36,089 and plug-in hybrid vehicles by 139.4 percent to 117,178 units.”

BMW does not reveal numbers for particular models but said that the fully-electric iX3 gave sales a significant boost. In the case of MINI:

“The brand’s electrified models proved especially popular with customers. Together, the fully electric MINI SE* and the plug-in hybrid variant of the MINI Countryman* accounted for more than 15 percent of the brand’s total sales volumes for the first half year.”

The Group should not have any problem with exceeding its goal of 1 million plug-ins sales (cumulative) by the end of 2021. It’s already around 850,000.

Pieter Nota, member of the Board of Management of BMW AG responsible for Customer, Brands and Sales:

“We are continuing the decisive electrification of our model line-up and expanding our range of fully-electric vehicles with two key innovation flagships: the BMW iX and the BMW i4. The iX and the i4 embody a new era of electromobility for BMW and I am looking forward to seeing both on the roads from November. High incoming orders for both models confirm our customers’ strong interest in these highly emotional vehicles.” 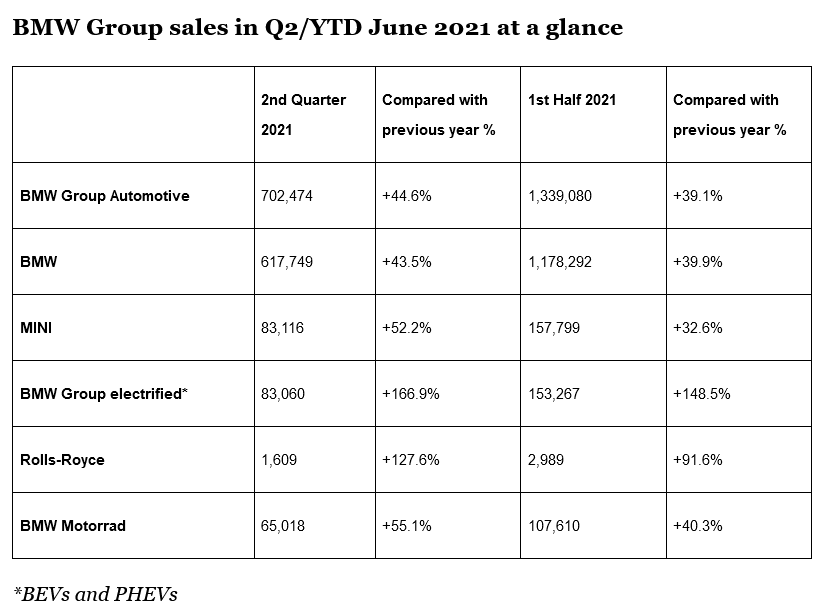 As we said before, BMW Group is accelerating its electrification efforts and shifting its focus from plug-in hybrids more towards all-electric models.

The next step is to expand the BEV lineup from BMW i3, MINI Cooper SE and BMW iX3 by BMW iX and BMW i4 in November 2021.

In the longer terms, several other BEV models to be introduced (to “around a dozen” by 2023), including:

BMW Group expects that by 2023, there will be at least one fully electric model in about 90% of its current market segments.

“In the coming years, these will be joined by further models, including fully electric versions of the high-volume BMW 5 Series, the BMW 7 Series, the BMW X1 and the successor to the MINI Countryman.

Between now and 2025, the company plans to increase its sales of fully-electric models by an average of well over 50 percent per year – to more than ten times the number of units sold in 2020. The BMW Group expects fully electric vehicles to account for at least 50 percent of its global sales in 2030. Over the next ten years or so, the BMW Group plans to release a total of about ten million fully-electric vehicles onto the roads.”

The total number of all-electric BMW and MINI cars on the road is expected to reach 10 million by around 2030.