The Coolest E-Bikes (and Sorta E-Bikes) at Electrify Expo

Don’t judge it by its looks, this thing actually rides pretty well.

Is it an e-bike? A moped? An electric unicycle welded to the front-end of a BMX bike?

The JackRabbit was far and away one of the oddest EVs I saw at Electrify Expo. Powered by a 300W rear hub motor and a very small 36V, 4.2Ah (151.2Wh) battery that’s set into the frame, the JackRabbit straddles the line between e-bike and e-moped. It uses bicycle components and it generally looks like a bicycle, but it lacks cranks and pedals. The rider’s feet sit on foldable footpegs instead.

Tom Piszkin, founder and CEO, told me he designed the bike for college students that needed something light enough to carry up stairs, small enough to fit into the back seat of a car and nimble enough to navigate a crowded campus. I’d say he pulled it off.

Though the extremely short wheelbase might suggest extremely twitchy handling, it’s surprisingly stable and predictable. This may be one of my favorite bikes I rode at the Electrify Expo, actually. Despite its funky looks, a considerable amount of thought and know-how was dumped into its design.

NCM is growing its footprint in the U.S., and it’s a brand to keep an eye on.

Owned by parent company Leon Cycles, NCM boasts the advantage of being one of the few e-bike brands that control much of the manufacturing process and even makes their own motors (Leon Cycles also owns e-bike motor company DasKit). 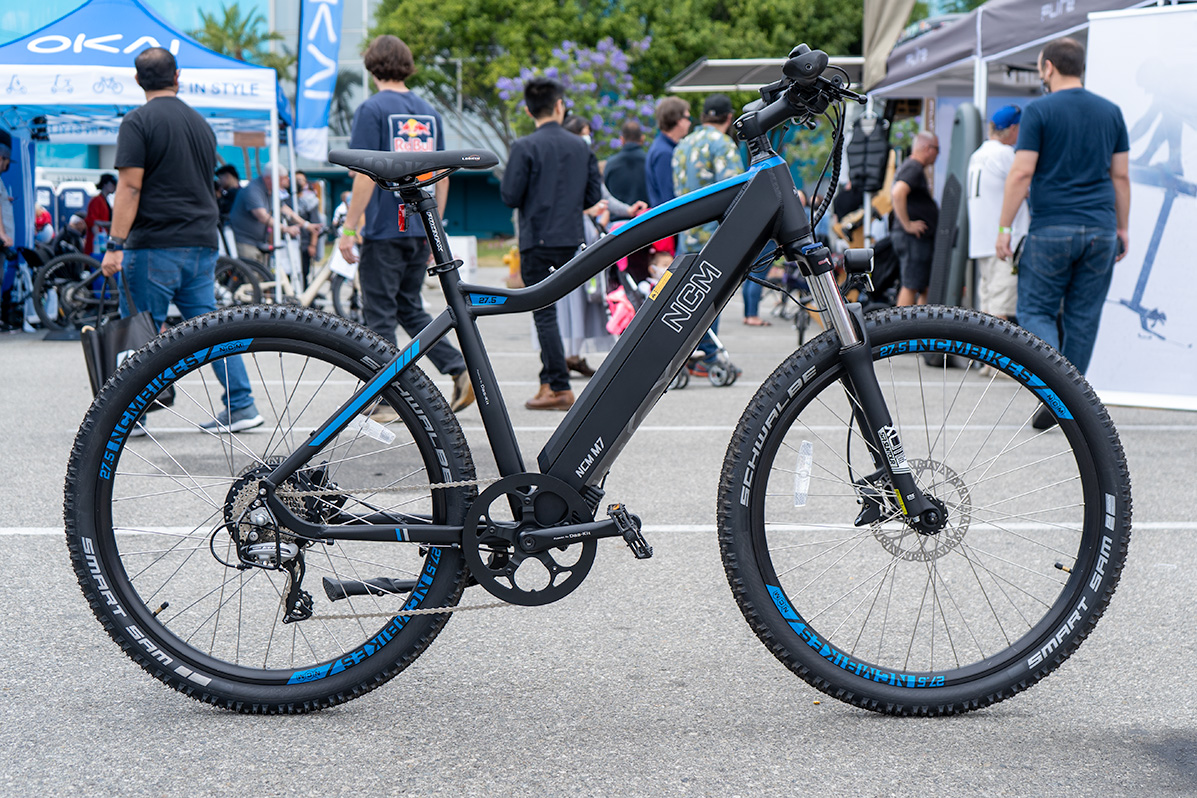 The NCM M7 is powered by a torque sensing rear hub motor and is designed for light off-road riding.

Though both bikes have very different frames and are designed for very different uses, they both share much of the same componentry. Both are built around a 750W torque sensing DasKit rear hub motor and a whopping 48V, 20Ah battery. They also share the same Shimano Acera 8-speed drivetrains and hydraulic disk brakes. 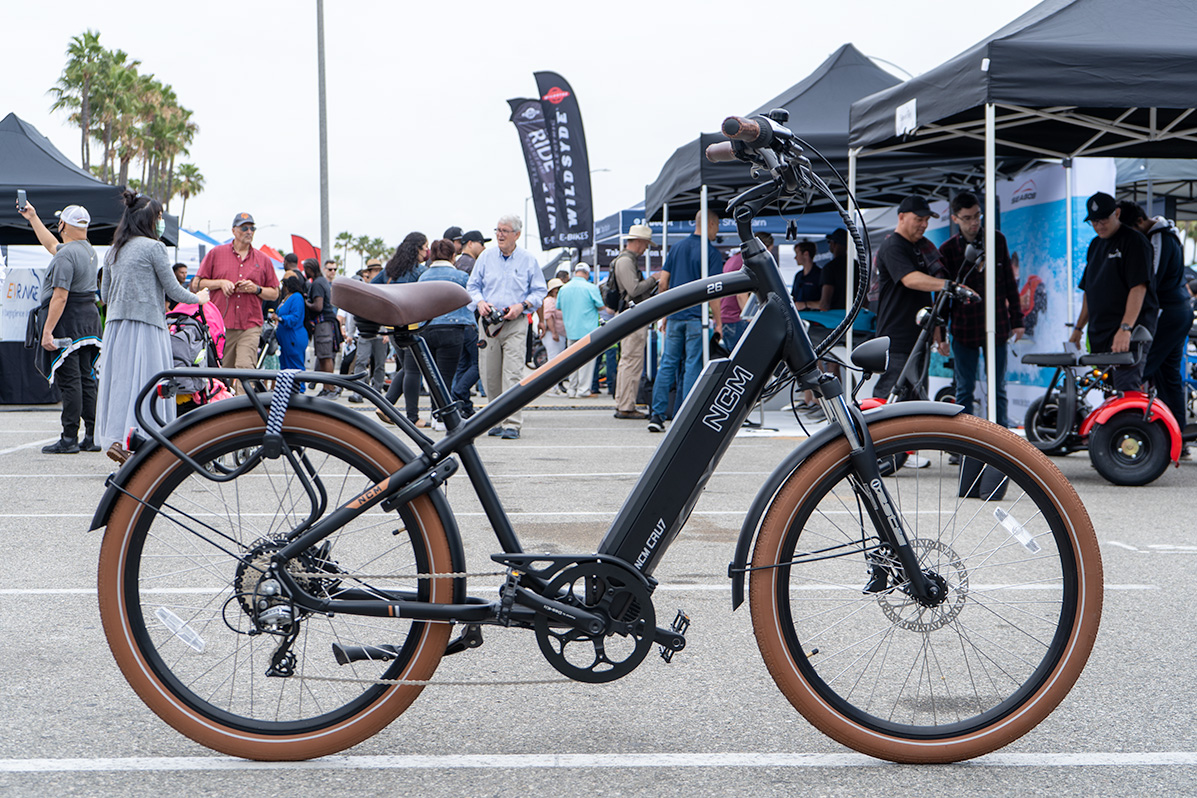 The NCM CRU7 is a cruiser-style e-bike.

The highlight of both these bikes for me are their torque sensor, which works incredibly well. As opposed to cadence sensors, which function much like an on/off switch for the motor, a torque sensor measures the amount of force a rider is applying at the pedals and applies motor power accordingly. So if you push hard on the pedals the bike accelerates hard and if you press softly on the pedals it accelerates softly.

Many brands have applied pedal assist sensors to their hub-powered e-bikes recently but few have done as good of a job as NCM. Both the M7 and CRU7 are incredibly responsive and have a powerband that’s very easily manipulated.

expect to see the NCM M7 and CRU7 hit the market in about one or two months.

With a Guiness World Record for furthest range on a single charge (228 miles), a 3,000W motor (when unlocked) and an absolutely monstrous battery, the Delfast Top 3.0i dabbles in the world of e-motorcycles as much as it does the world of e-bikes.

It’s undeniably a category bending EV that requires careful use by the user to make sure you’re riding safely and legally. But while it’s category might be a little nebulous, one fact certainly is not: The Top 3.0i is very, very fun.

The Electrify Expo was my first chance to ride the Delfast and it certainly lives up to its reputation. The bike is very quick (even in street legal settings) and it’s markedly burlier and more e-motorcycle like than most traditional e-bikes. It feels like a streetfighter, or something you might ride through an action scene in a James Bond film. 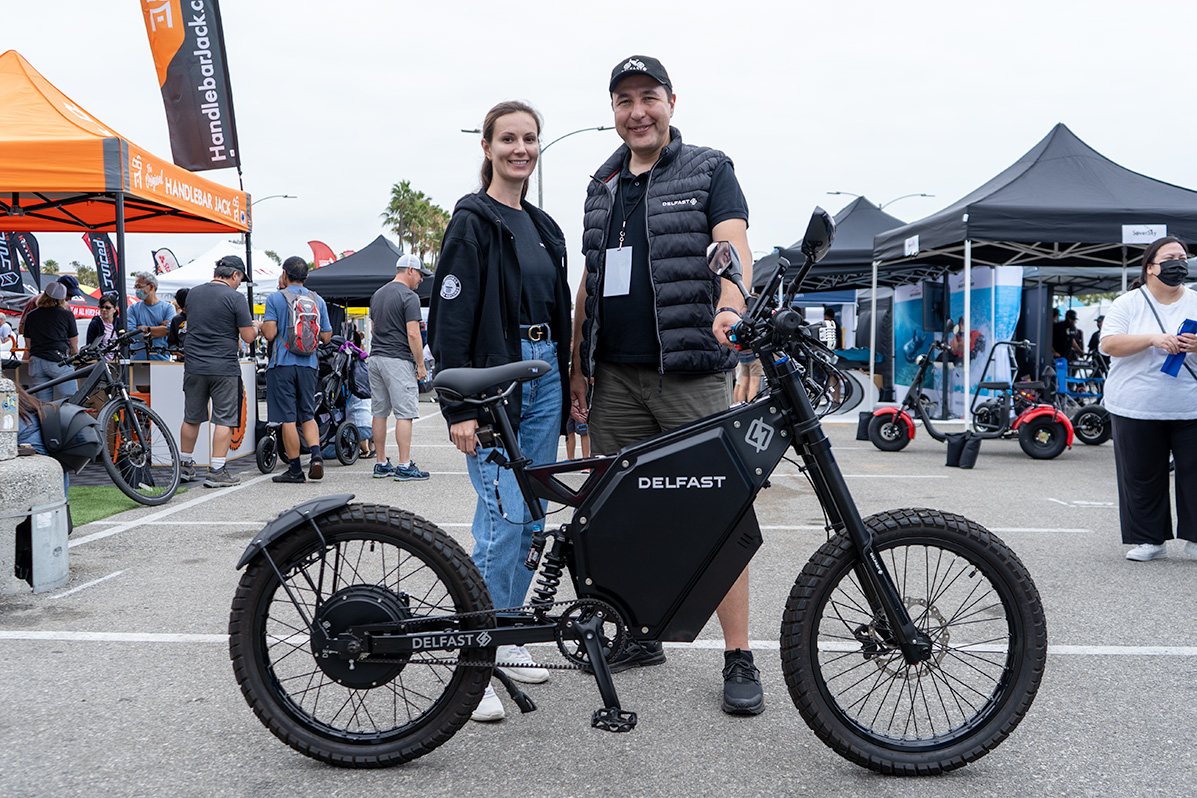 Daniel Tonkopi (right) and the Delfast Top 3.0i.

While the Top 3.0i is no stranger to most e-bike enthusiasts, what’s perhaps lesser known is that Delfast is a Ukranian company. Daniel Tonkopi started Delfast as a deliver service in the country’s capital, Kyiv, and while Tonkopi and about 10 employees have moved its headquarters to southern California, most of the staff — about 30 of them — still live in Ukraine.

When Russia invaded Ukraine in February those employees fled their homes in Kyiv, Kherson and Kharkiv — locations of some of the most harrowing fighting of the war — for safer corners of the country, though Tonkopi stresses that “there is no safe place in Ukraine right now.”

Those employees, who work in Delfast’s sales, customer service and research and development departments, have incredibly been doing their best to still log on for work from their hiding places in basements and bunkers, according to Tonkopi.

I’m working on a larger story about Delfast’s Ukranian team and how they’ve been impacted by the war, so keep an eye out for that. In the meantime, Delfast is donating five percent of their sales to the Ukranian war effort, so if you’ve been considering a Top 3.0i now’s a good time to place an order.

OK, so this one is definitely not an e-bike. But by golly is it cool. 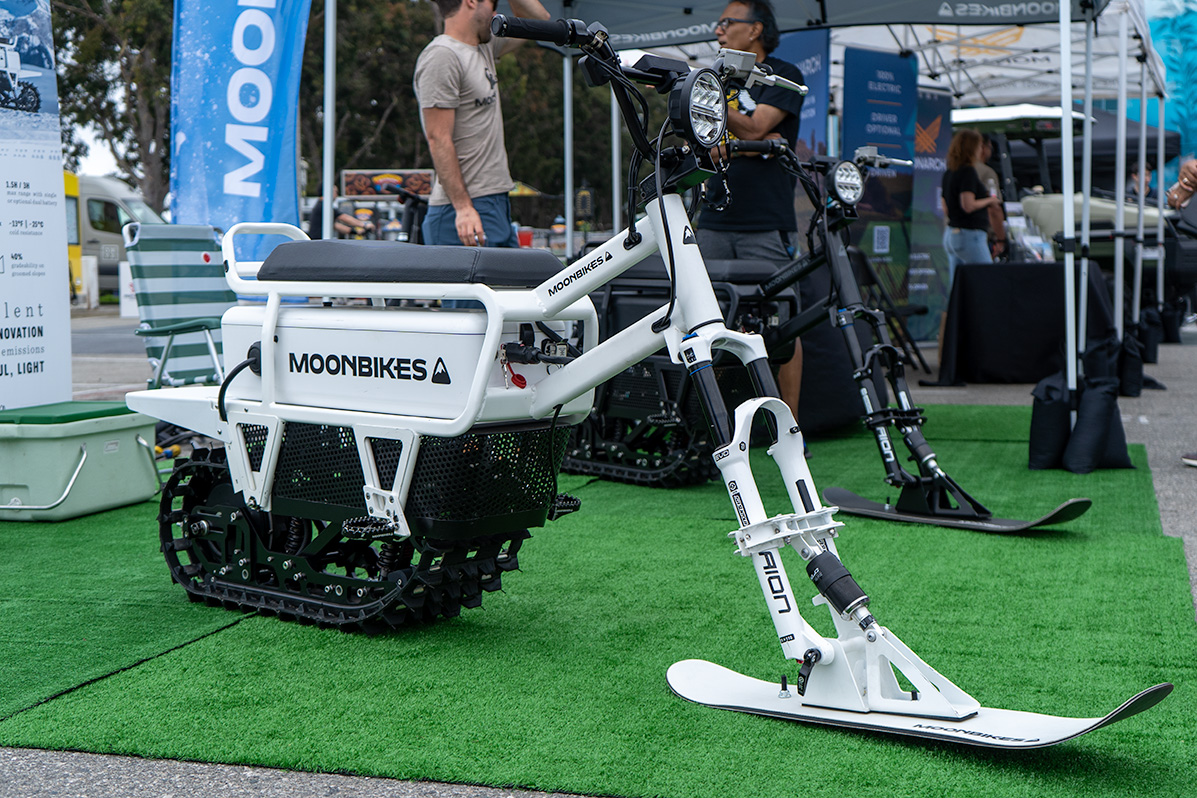 It’s like a snowmobile and an e-bike had a baby.

The Moonbike is not an e-bike and it’s not a snowmobile, but it’s also not not either of those things. The front end of the bike has lots of components you might recognize from a mountain bike, such as the fork, headset, handlebars and other things, and the rear end is undeniably snowmobile-y with a huge track and 3Kw motor.

I tried to convince the guys at the booth to let me try it out on the sand at the beach, but they said no. Maybe next time…

Worth the investment? Breaking down economics of electric vehicles – Electric Wheelco

Worth the investment? Breaking down economics of electric vehicles - Electric Wheelco