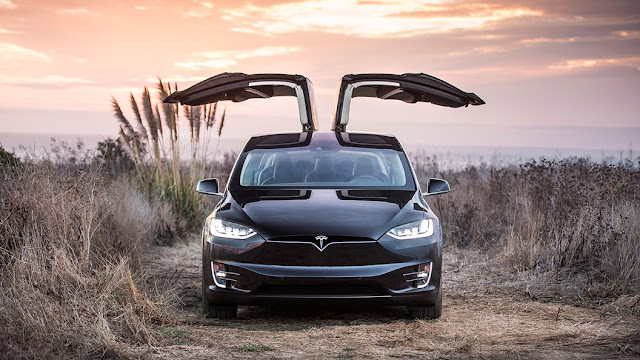 The only thing more volatile than a Tesla fanboy’s mood swings is the company’s share price. But away from Twitter and Instagram devotees, the Model X cuts an imposing, whale-shaped hole into the electric car chasm. We’ll leave it to you to make puns about it serving a porpoise…

Falcon doors (more on those later), an iPad-like cockpit screen, fart sound effects, and an unholy 0-62mph time of 2.6 seconds for the fastest model help the Tesla stand out from the crowd. But the crowd is circling and growing.

In case you’ve missed them, Audi, Mercedes, and Jaguar all have electric SUVs now in the shapes of the i-Pace, EQC, and Audi e-Tron. While BMW’s effort, the iX3, is now beginning to trickle into showrooms.

Sure, they’re all more compact than the Model X – closer in size to the forthcoming Model Y in fact – but in these early days of manufacturers fleshing out their electric ranges, it’s fine to combine the choices together.

With that pressure mounting, is the Model X still the car to go for if you want something that’s flashy, huge, and green?

Tesla has matured since the days of the original Roadster, and now Elon Musk’s EV company has a distinct design language. Featuring a minimal grille with no air inlets – a benefit of not having to cool down the byproducts of combustion in a traditional engine – the Model X looks like the updated Model S – but is unlike anything else on the road.

The Tesla Model X is just as distinctive from the reverse angle, but those clean lines betray just how huge it is. And it really is vast, so you can get it in five-, seven- or six-seat configurations.

Tesla’s Falcon Wing doors set the Model X apart from the Model S, as well as every other vehicle – and they get their own section in this review. While they appear to be a gimmick – and often feel like one – they’re sometimes genuinely useful.

To begin with, you can’t help but feel they’re made for early adopters to flaunt at Superchargers like peacocks. The whole process seems to take a while, and the doors don’t always unfurl in a smooth or uniform way, giving the impression they’re rather flimsy.

That’s a shame because there were times when the doors really came in handy. When parked close to other cars, for instance, they allow multiple passengers to hop in and out, where other doors would require a squeeze. Tesla says they’re invaluable for elderly passengers too, and you can see why.

But the doors can also be a nuisance, and there were times we’d try to avoid using them. Forgotten a bag in the back? Can’t stretch round and get it from the driver’s seat? Nope. Moments later, seconds later, you’ve got your bag, but onlookers think you’re trying to show off.

Are they cool? Debatable. Are they useful? Sometimes. Perhaps a Tesla Model X with one conventional door and one Falcon-wing would be a suitable halfway-house – although this presents problems for building cars for right- and left-hand drive markets. 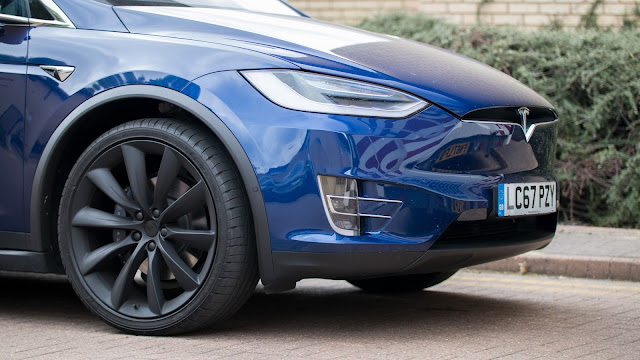 Is the Tesla Model X practical?

Whatever you think of the doors, they’re part of the Model X’s focus on practicality, and that design ethos is evident inside the car, too. Three seating configurations are available, and seats can be electrically folded and moved like parlour tricks: lightly press a hidden button and headrests fold down, for example.

With the rear two seats folded away, the boot isn’t small, and if you’re still not happy, there’s always the froot (front boot to those allergic to naff portmanteaux). However, all that empty space doesn’t always translate to spaciousness; when specified with two seats in the middle row, they’re positioned close to the rear doors with an overly large gap between them, rather than adding elbow room for the outer edge. Even the front seats offer a more balanced amount of elbow room on either side.

Seven-seat fully-electric SUVs are few and far between. The e-Tron, iX3, i-Pace and EQC are all strictly five-seaters. The Model S can do you seven-seats, while if you’re really not bothered by SUVnes, there are always the Mercedes EQV and Nissan e-NV200 car-derived vans.

Imagine a Model S with more height and weight, and you’re pretty much there. Just like the saloon, the Model X offers a relatively firm ride and swift linear acceleration, but only really reminds you of its 2.3 tonnes when you brake or turn. The performance is fun on slip roads and genuinely useful on the motorway, but don’t think this is a Stelvio Quadrifoglio rival. It just happens to be whisper-quiet and quick.

If acceleration is too fast for you, putting the car in Chill mode will make the performance a little more laidback – and handily extend the battery range too.

Like its siblings, the Model X’s steering is more of a switch than a precise instrument. Changing it to a sportier mode certainly helps, but not much. It may be a family car, but it’s an area where Tesla will need to improve on to compete with the work of more experienced chassis engineers if it wants to appeal to drivers who well, enjoy driving.

Of course, Tesla’s ultimate ambition is that you won’t be driving in the traditional sense all the time anyway. Our Model X was fitted with Tesla Autopilot, and it remains one of the best driving assistance packages on the market today. Once the system decides the road is suitable, Autopilot is engaged with two pulls of the dedicated stalk, and that’s pretty much it. Just twist the stalk to pick the distance between you and the car ahead.

Traffic jams, motorway lane changes, and sliproads are handled swiftly and smoothly, though, perhaps reassuringly, it errs on the side of aggressively cautious when confronted with cars that wander around their lanes too much. Outside of the motorway network, the usual parking assistance and ability to just let it creep at urban speeds following the car in front is enough to lower the heart rate somewhat.

European legislation currently limits the level of autonomous driving allowed, more than the technology in the car. In America, Autopilot can be seen handling long drives, albeit with the driver present – in Britain, the Tesla’s Autopilot is suitable for taking the strain out of long motorway drives but still requires a constant hand on the wheel, and clear input to show someone other than the computer is paying attention. This also limits Tesla’s ability to self-park and summon in the UK – for now. 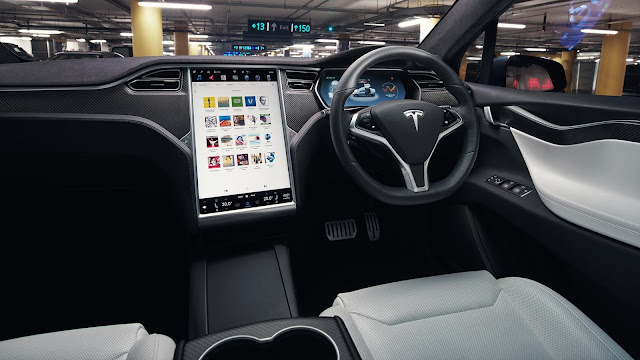 Even when Autopilot isn’t engaged, the Tesla continually advises you on your proximity to other vehicles, and will even identify lorries and motorcycles in your path. That small detail helps to build an element of trust between you and the car, and means when you do use Autopilot, you’re aware the Tesla has it covered.

But it’s not without faults. Lane changes are a little awkward when using Autopilot (nudge the indicator, and it’ll swap lanes for you), as they seem to take an age, and often result in you doing the steering yourself. What’s more, road users with loose lane discipline can also scare Tesla into dramatically slowing down.

But will I be able to charge my Tesla Model X?

The charging experience will largely be determined by where you are in the country and what you do with your Model X. The Tesla Supercharger network is growing and using one is how all electric car charging should be; plug it in and within seconds you can see the range increasing as it gets a full 120kW up its socket. Filling from empty takes less than one hour – and most users will typically be topping up rather than ‘brimming’ their batteries.

While you can get chargers installed in your home, we were able to complete trips between Peterborough and London – along with local errands – by just using the Superchargers at Bishops Stortford on the way up or down. Throw in the ability to charge at home and at work, and unless you’re venturing very far, and into an area of lower charging coverage, range is hardly worth thinking about. It just works.

When you do have to charge, though, the experience is painless. After plugging in, you can either hang around and follow the charging progress on a smartphone app, or just wait in the car – though fan noise during charging can get quite loud.

One tip though. If you’re able, it’s best to charge to full capacity even if you don’t need to. That way, when you arrive at your destination, there’s still juice to make it to another charger on the return leg.

What else do I need to know?

Adding in the six- or seven-seat options costs extra but are definitely worthwhile, otherwise, you might as well stick with the more conventional Model S.

And the Tesla Model X UK price? Starting at £87,980 for the long-range model or £102,980 for the Performance – with ‘ludicrous mode and a slightly reduced WLTP range – it’s far from an enabling technology that will change the world; for that, you’ll need the smaller, more conventional Model 3. Four years on from launch, the Tesla Model X isn’t the leap ahead it used to be, but it’s still a quirky, intuitive SUV – and one that’d probably suit some families well. The Model X is still disruptive, and from the sci-fi panoramic windscreen to doors that open for you, the Tesla still gives you some things that other cars just don’t have.

At the time of writing, the Tesla Model X wins by default in this sector. But the Jaguar i-Pace, Mercedes EQC and Audi e-Tron are all closes. What these cars lack in range, they make up for in dynamics and build quality.