Italy’s auto market is at a crossroads. While most European markets continued seeing EV growth through the first six months of 2022, albeit in an overall subdued automotive economy, the Bel Paese was the victim of a self-inflicted wound, as the Italian government struggled for months before launching an overdue fiscal package to support low emission vehicles.

The result so far is a stop to the growth that had characterized electric mobility for the past five years in a row.

Editor’s Note: This article was originally published on opportunity:energy.

Official stats by Unrae depict a clear picture of what has been lost throughout the first six months of 2022. With less than 694,000 registrations, the Italian auto market shrank by over 22% Year-On-Year (YoY) compared to the almost 900,000 units recorded in the record first half of 2021, a shameful contrast.

On a relatively positive note, plugless (full and mild) hybrids have now become the most popular powertrain for sale, with a commanding 33% market share, a historic shift. Petrol and diesel powertrains lost out, retreating to 27.6% and 20.6% respectively (from 32% and 24.2% a year ago) while chopping a third YoY in overall registration numbers.

Plug-ins faired better than ICE powertrains, but just relative to their gigantic losses. Full electric cars reached 25,082 registrations in H1 2022, which is a sad 17.5% dip from last year’s 30,390 units over the same period of time. Market share, nonetheless, increased to 3.6% for the period, slightly improved over the 3.4% figure from the first half of 2021.

The agonizing wait for long-promised, new financial incentives produced an obvious loss of momentum from January onward, something that only the new, albeit greatly reduced, fiscal package partially alleviated from late May. It is still to be seen if such a relatively long period of uncertainty will reverberate throughout the rest of the year, as automakers possibly maintain a diverted supply to other European countries, and customers’ hesitancy is still unresolved. 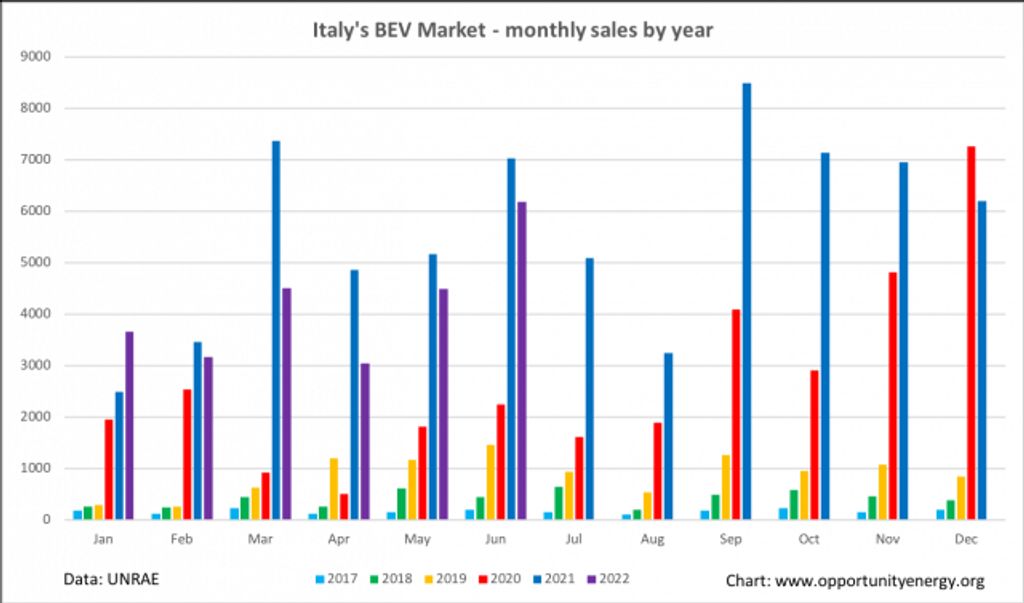 Plug-in hybrids managed to maintain the positive trend from last year, resulting in 37,330 registrations for the first half of 2022. This was in line with the 38,030 units recorded in the same period of 2021, which means the market share for PHEVs improved more substantially than BEVs to 5.4%, compared to 4.3% in H1 2021.

The combined market share for all plug-in powertrains thus increased to 9% for the first half of 2022, up from 7.7% a year before. A relatively positive note of course, but also a missed opportunity for a paradigm-shift scenario, which could have been supported by a more logical approach by the Italian government on financial incentives for low-emission models. 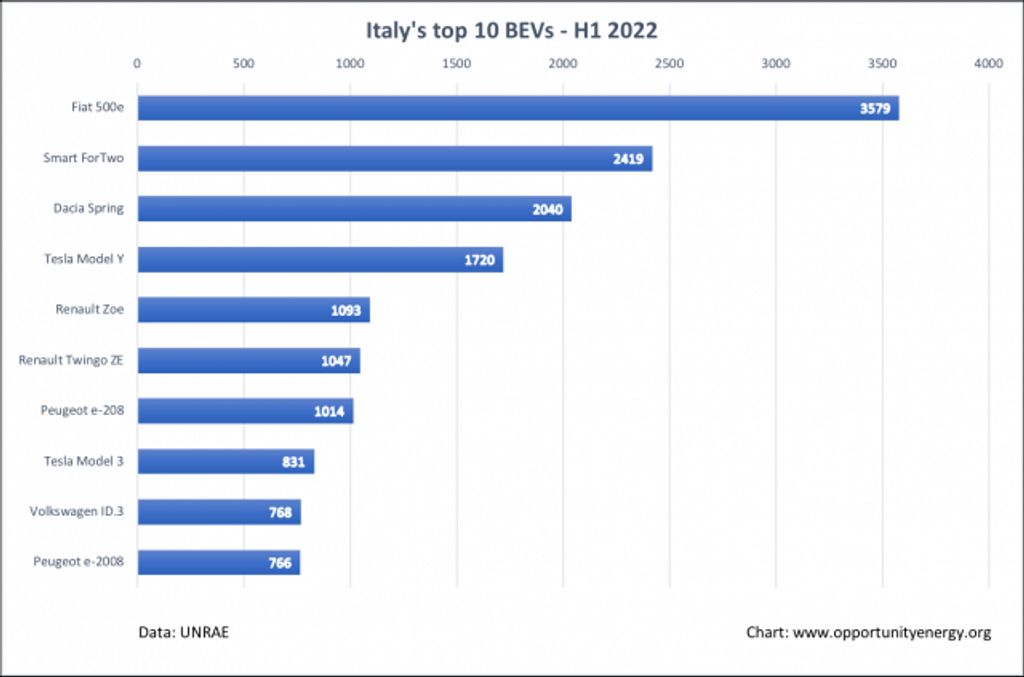 An obvious podium saw A-segment models taking the lead. Fiat 500e widely dominate its own domestic market, albeit at a reduced pace. The 3,579 units recorded in the first half of 2022 were well short of the over 5,100 units that were sold in the same period of last year. A similar situation was true for runner-up Smart ForTwo, second at 2,419 registrations (they were 3,580 in H1 2021). A novelty for the year is the third place of Dacia Spring, which closed the top trio with 2,040 units, well below its best-seller potential.

Out of the podium, the main surprise is Tesla Model Y, which landed in the fourth position with 1,720 units – ahead of many cheap minis – despite the hefty price tag and being outside of any fiscal incentive regime. The D-segment crossover SUV is making strides – one quarter at a time – proving how a compelling model will beat unfavourable economics even in a tough arena such as the Italian car market.

Compact French models Renault Zoe, Twingo ZE and Peugeot e-208 followed at a distance with little more than 1,000 units each, far from the numbers they could achieve in an ideal market such as this one. This may just be due to diverted supply to other markets, or lukewarm demand amidst growing competition and reduced incentives. Either way, the coming months will help understand if this trend is for the long term.

Another victim of these tough times is, somewhat surprisingly, the Tesla Model 3, which only got to eighth place with 831 units, just ahead of VW ID.3 and Peugeot e-2008. Still a best seller elsewhere in Europe, the cheapest Tesla is probably suffering the sudden end to the previous incentive scheme, which had lifted it to fifth place last year, coupled with a terrifying 20% price hike, as well as the internal competition from its own larger sibling the Model Y. Hard to predict if the world’s best selling BEV will recover, at least in the medium term, while it keeps prospering in the rest of Europe.